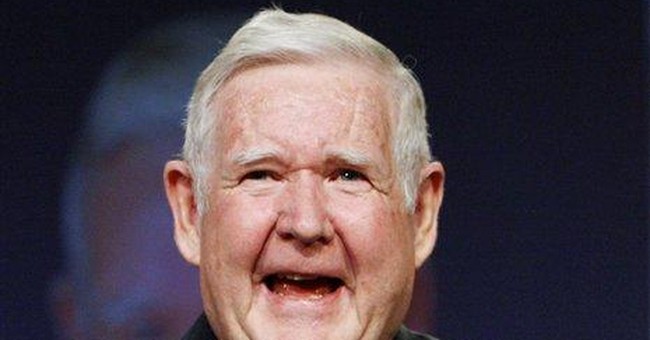 Get this: King of Pork John Murtha, the 19-term Democratic congressman from western Pennsylvania, now wants to welcome a flood of Guantanamo Bay jihadists into his district. I don't want to hear a single word of protestation from the constituents who put this money-grubbing, security-undermining fool back into office. As you vote, so shall you reap.

Murtha audaciously expressed his hope to house Gitmo detainees after President Barack Obama circulated his draft executive order to shut the facility down by the end of the year. "Sure, I'd take 'em," Murtha glibly retorted. "They're no more dangerous in my district than in Guantanamo." Murtha blustered that there was "no reason not to put 'em in prisons in the United States and handle them the way they would handle any other prisoners."

Before we unpack all that ignorant nonsense, let us pause to illuminate Murtha's motives. He is driven neither by a warped sense of patriotic duty nor by misguided human rights compassion for al-Qaida foot soldiers. No, what fuels him is unabashed greed and a lifelong edifice complex. The money-grubbing Murtha, you see, just can't wait to snatch up federal tax dollars to build a new maximum security prison for the Gitmo gang -- no doubt with his name and face plastered all over it. Welcome to the John Murtha Jihadist Correctional Facility.

Forget about the increased risk Murtha would subject his district to by volunteering it as a highly visible terror target. Forget about the disgusting affront this pork grab poses to the families of those who died on United Flight 93 -- which 9/11 terrorists crashed in Shanksville, Pa., represented by none other than Murtha at the time. There's a shining prison on a hill to be built, and Murtha will sell out his neighbors' safety to make sure it's built on his hill.

Murtha's got logs to roll and wheels to grease. National security is an impediment, not an imperative. Would you expect anything less from the shameless politician caught on tape in the 1980s Abscam congressional bribery scandal mulling payoffs from FBI agents posing as Arab sheiks? ("How much money we talking about," Murtha asked one of the bagmen. "You know, we do business for a while, maybe I'll be interested, maybe I won't.")

Murtha's contempt for the people he serves should surprise no one. This is the man who called his own voters "rednecks" and who has refused to back down from his smears of the exonerated Marines who served in Haditha, Iraq, as "cold-blooded" murderers. This is the man who denies that we are combating al-Qaida terrorists in Iraq. This is the man who lives in a fantasy world where re-deploying American soldiers to Okinawa is a viable defense plan.

Murtha can't see any reason for keeping Gitmo detainees from flooding our regular prisons and preventing them from exploiting our civilian court system, because he is willfully blind and stone stupid.

While Rahman's court-appointed translator conveyed the message during prison visits, Stewart made "covering noises," including shaking a water jar and tapping on the table. A draft fatwa was discovered in Stewart's office; she also signaled Rahman's wishes to his jihadist organization in an interview with Reuters news service. The publication of those comments ushered in a new wave of bombing attacks by Rahman's previously dormant terrorist outfit. The left-wing radical Stewart remains unrepentant and clings to her belief that the 9/11 terrorist attacks were an "armed struggle."

Now, imagine a traitorous bleeding-heart Stewart assigned to each and every one of the 250-odd Gitmo detainees. Imagine the risk of similar jailhouse collaborations to innocent men, women and children at home and abroad. Imagine the three-ring, O.J.-like circuses these trials will bring to your backyards. It's easy if you try.

Prosecuting suspected terrorists like petty thieves or drug dealers is fraught with peril. The Democrats have learned nothing from the failed law enforcement strategies of the feckless Clinton era. Confiscated al-Qaida training manuals have revealed that recruits are instructed in how to manipulate the Western legal system if they are captured.

Affording accused al-Qaida operatives the Sixth Amendment right to a public trial threatens to compromise classified information necessary to prosecute future terrorist trials. Other rights guaranteed by the Sixth Amendment -- the right to subpoena witnesses and compel them to testify, the right to an attorney -- can interfere with interrogations of captured suspected al-Qaida agents. And while the lives of those directly involved in, say, a mob trial might be endangered, the entire nation may be at risk if we allow suspected members of a terrorist network to engage in the discovery process and in privileged communications with attorney-abettors.

Who will be accountable when these prosecutions run amok? When convicted jihadists wreak bloody havoc from behind bars? And when Gitmo recidivists wage war anew once released?

John Murtha doesn't give a damn. Do you?