A Debate "Moderator" In the Tank for Obama 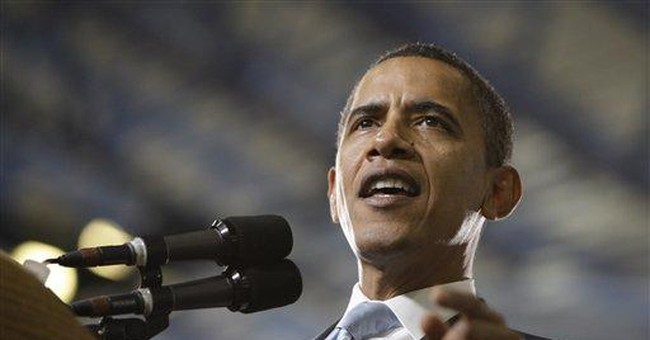 My dictionary defines "moderator" as "the nonpartisan presiding officer of a town meeting." On Thursday, PBS anchor Gwen Ifill will serve as moderator for the first and only vice presidential debate. The stakes are high. The Commission on Presidential Debates, with the assent of the two campaigns, decided not to impose any guidelines on her duties or questions.

But there is nothing "moderate" about where Ifill stands on Barack Obama. She's so far in the tank for the Democratic presidential candidate, her oxygen delivery line is running out.

In an imaginary world where liberal journalists are held to the same standards as everyone else, Ifill would be required to make a full disclosure at the start of the debate. She would be required to turn to the cameras and tell the national audience that she has a book coming out on Jan. 20, 2009 -- a date that just happens to coincide with the inauguration of the next president of the United States.

The title of Ifill's book? "The Breakthrough: Politics and Race in the Age of Obama." Nonpartisan my foot.

Random House, her publisher, is already busy hyping the book with YouTube clips of Ifill heaping praise on her subjects, including Obama and Obama-endorsing Mass. Gov. Deval Patrick. The official promo for the book gushes:

"In 'The Breakthrough,' veteran journalist Gwen Ifill surveys the American political landscape, shedding new light on the impact of Barack Obama's stunning presidential campaign and introducing the emerging young African American politicians forging a bold new path to political power. … Drawing on interviews with power brokers like Sen. Obama, former Secretary of State Colin Powell, Vernon Jordan, the Rev. Jesse Jackson and many others, as well as her own razor-sharp observations and analysis of such issues as generational conflict and the 'black enough' conundrum, Ifill shows why this is a pivotal moment in American history."

Ifill and her publisher are banking on an Obama/Biden win to buoy her book sales. The moderator expected to treat both sides fairly has grandiosely declared this the "Age of Obama." Can you imagine a right-leaning journalist writing a book about the "stunning" McCain campaign and its "bold" path to reform timed for release on Inauguration Day -- and then expecting a slot as a moderator for the nation's sole vice presidential debate?

Yeah, I just registered 6.4 on the Snicker Richter Scale, too.

Despite the protestations of her colleagues that she will be fair, Ifill has appeared on numerous radio and TV talk shows over the past several months to cash in on her access to the Obama campaign. She recently penned a fawning cover story on the Obamas for Essence magazine that earned much buzz. The title? "The Obamas: Portrait of an American Family." A sample of Ifill's hard-hitting investigative journalism, illustrated with Kennedy-esque photos of the Obamas and children posing at home on the back porch and by the piano:

"Barack Obama is sitting in the back of his rented luxury campaign bus with its granite counters and two flat-screen TVs. The Illinois senator's arms are wrapped around his wife, Michelle, whom he doesn't get to see much these days. At this very moment he is, of all things, singing."

During the Democratic National Convention, Ifill offered her neutral analysis on NBC News before Michelle Obama's speech: "A lot of people have never seen anything that looks like a Michelle Obama before. She's educated, she's beautiful, she's tall, she tells you what she thinks and they hope that she can tell a story about Barack Obama and about herself."

"I was appalled by Gwen Ifill's commentary directly following Gov. Sarah Palin's speech. Her attitude was dismissive and the look on her face was one of disgust. Clearly, she was agitated by what most critics view as a well-delivered speech. It is quite obvious that Ms. Ifill supports Obama as she struggled to say anything redemptive about Gov. Palin's performance. I am disappointed in Ms. Ifill's complete disregard for journalistic objectivity."

Like Obama, Ifill, who is black, is quick to play the race card at the first sign of criticism. In an interview with the Washington Post a few weeks ago, she carped: "[N]o one's ever assumed a white reporter can't cover a white candidate."

It's not the color of your skin, sweetie. It's the color of your politics. Perhaps Ifill will be able to conceal it this week. But if the "stunning" "Breakthrough" she's rooting for comes to pass on Jan. 20, 2009, nobody will be fooled.