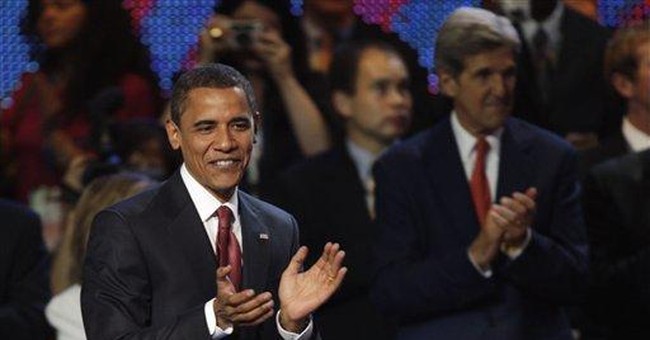 Where are all the free speech absolutists when you need them? Over the past month, left-wing partisans and Democratic lawyers have waged a brass-knuckled intimidation campaign against GOP donors, TV and radio stations, and even an investigative journalist because they have all dared to question the radical cult of Barack Obama. A chill wind blows, but where the valiant protectors of political dissent are, nobody knows.

On August 11, I called the American Civil Liberties Union national headquarters in New York for comment about the Chicago gangland tactics of one of these groups -- a nonprofit called "Accountable America" that is spearheaded by a former operative of the Obama-endorsing MoveOn outfit.

"Accountable America" is trolling campaign finance databases and targeting conservative donors with "warning" letters in a thuggish attempt to depress Republican fundraising. (You'll be interested to know that the official registered agent of Accountable America is Laurence Gold, a high-powered attorney for the American Federation of Labor and Congress of Industrial Organizations (AFL-CIO) who has testified before the Senate complaining about the use of campaign finance laws to stifle the speech of union workers -- a pet cause of the ACLU.)

The ACLU press office failed to respond to my initial call. On August 13, I followed up through e-mail:

"I called on Monday requesting a statement from the ACLU about Accountable America's intimidation campaign against GOP donors. What is the ACLU's position with regard to such efforts? Waiting for your statement..."

"Michelle, My apologies that I cannot be of more assistance, but we don't have anyone available. Thanks, Pam."

My reply: "Pam -- Does this mean you don't have anyone available today, this week, or for the foreseeable future?"

On August 20, after a week of silence, I forwarded the message again to the ACLU press office. No response.

So, I won't bother asking the ACLU's opinion of the latest wave of speech-squelching moves by the Obama campaign:

On Tuesday, the Obama campaign sent another letter to the Justice Department demanding investigation and prosecution of American Issues Project, the group that produced the Ayers ad, as well as Dallas billionaire Harold Simmons, who funded it.

And on Wednesday, Obama exhorted his followers to sabotage the WGN radio show of veteran Chicago host and University of Chicago Professor Milt Rosenberg. Why? Because he invited National Review writer Stanley Kurtz to discuss his investigative findings about Obama's ties to Ayers and the underwhelming results of their collaboration on a left-wing educational project sponsored by the Chicago Annenberg Challenge. The "Obama Action Wire" supplied Rosenberg's call-in line and talking points like this:

"Tell WGN that by providing Kurtz with airtime, they are legitimizing baseless attacks from a smear-merchant and lowering the standards of political discourse. ... It is absolutely unacceptable that WGN would give a slimy character assassin like Kurtz time for his divisive, destructive ranting on our public airwaves."

Behind the glowing, peaceful facade lies Barack "The Silencer" Obama and his silent enablers on the left. While mainstream journalists schmoozed with liberal celebrities in Denver, practiced yoga with left-wing bloggers and received massages at the Google convention tent near touchy-feely Barackopolis, Team Obama was on an ugly, aggressive warpath sanctioned by Mr. Civility. While compassionate Obama prepared to stand before thousands of worshipers at Invesco Field, purporting to give voice to the voiceless, his Chicago-schooled campaign machine was working overtime to muzzle conservative critics. "We want it to stop," ordered one pro-Obama caller to WGN.

Welcome to the future: the politics of Hope and Change enforced by the missionaries of Search and Destroy.