A Reply to Eric Metaxas’ “Letter to the American Church”
OPINION

The Marines Vs. Haditha Smear Merchants

Michelle Malkin  |  Jun 18, 2008
The opinions expressed by columnists are their own and do not necessarily represent the views of Townhall.com.
Top Columns
Trending on Townhall Media 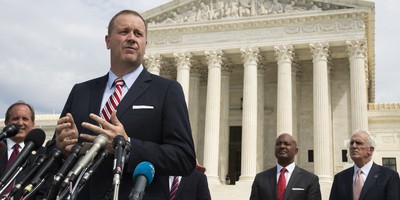 Yet another U.S. Marine, Lt. Col. Jeffrey Chessani, had charges dropped Tuesday in the so-called Haditha massacre -- bringing the total number of Marines who've been cleared or won case dismissals in the Iraq war incident to seven. "Undue command influence" on the prosecution led to the outcome in Chessani's case. Bottom line: That's zero for seven for military prosecutors, with one trial left to go.

I repeat: Haditha prosecution goes 0-7. But you won't see that headline in the same Armageddon-sized font The New York Times used repeatedly when the story first broke.

The Times, Rep. John Murtha, D-Pa, and the rest of the anti-war drum-pounders who fueled the smear campaign against the troops two years ago should hang their hands in shame. They won't, of course. Perpetuating the "cold-blooded Marines" narrative means never having to say you're sorry.

Murtha and company applied Queen of Hearts ("Off with their heads!") treatment to our own men and women in uniform while giving more benefit of the doubt to foreign terror suspects at Gitmo. It is worth recalling, because the press won't do it for you, what they concluded about the now-crumbling Haditha case in the summer of 2006 before a single formal charge had been filed.

-- MSNBC hangman Keith Olbermann, who couldn't wait to define the entire war in Iraq by a single moment about which he knew nothing, inveighed that the incident was "willful targeted brutality." Due process? For convicted cop-killer Mumia Abu-Jamal, of course. For our military? Never mind.

-- Far-left The Nation magazine railed, "Enough details have emerged … to conclude that … members of the 3rd Battalion, 1st Marine Regiment perpetrated a massacre." The publication also judged the event "a willful, targeted brutality designed to send a message to Iraqis." Not content with hanging the troops, the Nation pinned blame on the president and a so-called "culture of impunity" that supposedly permeates the most accountable military in the world.

-- Singing the same tune as The Nation, The New York Times spilled a flood of front-page ink on the case and took things a step further in a lead editorial blaming not just President Bush, but also top Pentagon brass for the "nightmare" killings in Haditha. Times reporter Paul von Zielbauer filed over 30 stories on the case, which the paper wishfully called the "defining atrocity" of the Iraq war.

-- Hoping to facilitate a self-fulfilling prophecy, media tools around the world likened Haditha to the Vietnam War's most infamous atrocity -- from The Guardian ("My Lai on the Euphrates?") to the Daily Telegraph ("Massacre in Iraq just like My Lai") to the Los Angeles Times ("What happened at the Iraqi My Lai?") to The New York Times' Maureen Dowd ("My Lai acid flashback") and the Associated Press, which reached into its photo archives to run a 1970 file photo of My Lai to illustrate a Haditha article.

-- And, of course, there's the permanent stain left by the slanderous propaganda of Rep. Murtha -- the stab in the Marines' backs heard 'round the world: "Our troops overreacted because of the pressure on them, and they killed innocent civilians in cold blood."

Relatives of the Haditha Marines have called for Congress to censure Murtha, who cuts and runs to the nearest elevator when questioned about the Haditha dismissals. He and the Haditha smear merchants have skated while the men and their families suffered global whippings on the airwaves and eternal demonization in print. Whose "culture of impunity"?