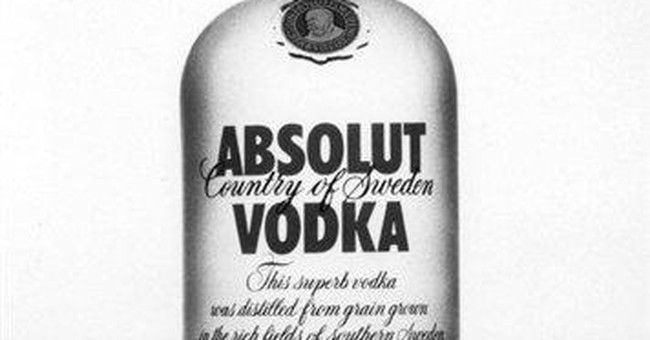 Is it wise for a global beverage company to pander to radical politics while alienating a much wider consumer base?

Absolut, the Swedish-owned vodka maker, apparently drinks to that. Last week, my e-mailbox lit up with messages from readers and fellow bloggers about a new Absolut ad catering to Mexican drinkers who believe the American Southwest belongs to them. (That extreme ethno-supremacist idea, of course, is not news to anyone who has paid attention to the massive illegal alien marches of the past two years -- where "This is our continent, not yours" has been a rallying mainstay.) As part of its "In an Absolut World" campaign in print magazines and on billboards, the company featured a large color photo of a redrawn map of the continental United States. The ad imposed pre-1848 borders on America, with Mexico swallowing up California, Texas, New Mexico, Utah, Colorado and Arizona.

Here's how Favio Ucedo, creative director of leading U.S. Latino advertising agency Grupo Gallegos, which was not involved in the Absolut campaign, explained the reconquista-endorsing ad to the Los Angeles Times: "Mexicans talk about how the Americans stole their land, so this is their way of reclaiming it. It's very relevant and the Mexicans will love the idea."

Oops. Guess he didn't get the liberal talking points manual: You're supposed to deny that reconquista exists and label anyone who criticizes it as a delusional racist. And remember: The National Council of La Raza ("the race") claims that reconquista is just a "code word" invented by conservative "hate groups" who are dreaming the whole thing up.

Reader Paul Hergert wrote to Absolut: "Your company's illustration of Mexico occupying a large part of the western United States is reprehensible for myriad reasons. Not only is it an anachronistic and ersatz view of geography, it also unnecessarily inflames American/Mexican tensions. I understand that marketing is to be provocative, but when it can be used as propaganda for certain people/nations, it has crossed the line into the political realm and is, therefore, inappropriate."

Bar owner Matthew Rogers of Pt. Richmond, Calif., sent this note to the company: "I run a bar in Pt. Richmond. … After seeing your ad campaign where you show a western map of the United States in which California is part of Mexico again, I've decided to do the following: 1) Never carry Absolut. Ever; 2) Lower the price of Ketel One vodka to $2 a shot indefinitely to build loyalty; 3) Print a copy of your ad and put it above the Ketel One drink special; 4) Tell all my friends and family what Absolut thinks of the United States of America and our right to enforce border laws. I am on the frontline of illegal immigration and its effects. Where are you? Oh, yes, Sweden. Good riddance."

Absolut's initial response to complaints was to hang up on consumers who phoned and to delete their e-mail without bothering to read it. But the controversy spread like a California wildfire stoked by Internet Santa Ana winds. In the first of two statements, Absolut Vice President of Corporate Communications Paula Eriksson attempted to douse the flames by touting the company's embrace-diversity ethos. "As a global company," she pedantically intoned, "we recognize that people in different parts of the world may lend different perspectives or interpret our ads in a different way than was intended in that market. Obviously, this ad was run in Mexico, and not the U.S. -- that ad might have been very different."

That arrogant, p.c. sanctimony had the effect of pouring gas on the flames. So over the weekend, Eriksson issued a new statement announcing withdrawal of the ad. It was comically titled "We apologize" -- and disingenuously argued that "In no way was the ad meant to offend or disparage, or advocate an altering of borders, lend support to any anti-American sentiment, or to reflect immigration issues. …This is a genuine and sincere apology."

For its part, the open-borders Associated Press attempted to minimize the widespread opposition to the Absolut ad from Americans and persisted in labeling reconquista views "fringe." I direct them to the speech given two weeks ago in San Bernardino by Hillary Clinton campaign co-chair Dolores Huerta, who railed, "We didn't cross the border, the border crossed us" and gloated that immigration enforcement is moot because the reconquista is won. "It's really too late," Huerta said. "If 47 million (Latinos) have one baby each … it's already won."

Maybe Absolut should hire Huerta as its next spokesperson.

Fresh off its Aztlan debacle, the company announced its newest campaign this week featuring an ad titled "Ruler," described as "a humorous look at gay men and their fascination with perfect, eight-inch 'member' measurements."

The company doesn't seem to have grasped that left-wing identity politics and liquor don't mix.