The “Fear Factor” in Foreign Policy: The Case of Egypt 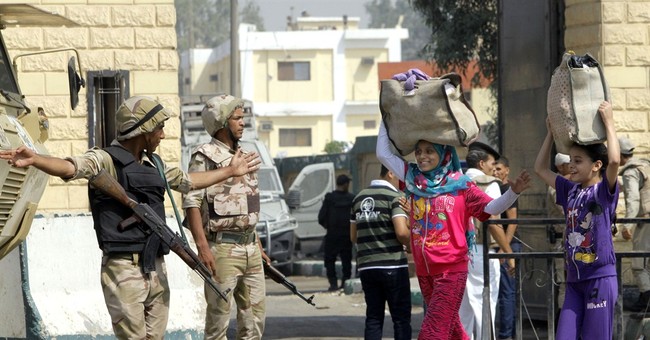 Trending
Since September 11, 2001, Western governments have developed a “fear factor” approach in how they deal with Islamist groups. Fear leads those governments, especially the United States, to do foolish things—like supporting apparently less-overt Jihadist Muslim groups, such as the global powerhouse of the Muslim Brotherhood.

In doing so, they think they can kill two birds with one stone. To the Islamists, they can say: “See, we’re not anti-Islamist. We’re just against the bad guys who want to kill us.” To other Muslims, they can say: “Please tell those terrorists not to attack Western targets or people.”

But it’s easy to see how this “fear factor” causes the West to stumble into the darkness of foolishness.

For example, many Western governments shipped loads of weapons to Islamic terrorists in Libya to depose that country’s strong man, Muammar Gaddafi. Never once did those governments have the wisdom to ask: “What will happen to those weapons once Gaddafi is deposed? How will that terrorist network, which belongs to the global network of terror, use those arms? Will they turn them against the West?”

Well, now we know the answer to that question. They did, indeed, turn them against us when they killed the U.S. Ambassador and three other American heroes in Benghazi.

And now that story is being repeated in Syria. Are any of those questions that weren’t asked regarding Libya being asked now? No.

The most blatant manifestation of “fear factor” foreign policy, however, is being exhibited today in Egypt. When Egyptians, who had suffered under twelve months of the U.S.-supported Islamo-fascist regime of the Muslim Brotherhood, rose to shake off the shackles of tyranny, they got clobbered and abused by the U.S. Administration.

Ahmed Said, the head of the Egyptian revolution, which led 33 million people into the streets, recently wrote an impassioned letter to President Obama. In the letter, Said stated: “We believe in the same fundamental values on which the U.S. was founded.” Later, he goes on to say about the Muslim Brotherhood: “They pretend they are God’s emissaries and they will not rest until they have forced the whole world into submission.”

Mr. Said finishes by reminding Mr. Obama of something that he shouldn’t have to be reminded of: “Mr. President, the interest of peace in the region is served best by truly peace-loving people and democratic values.”

Will Mr. Obama listen to this heart-rending reminder? Will he shake off the shackles of fear in his foreign policy and act with Thatcher-like courage? Will he fire his Muslim Brotherhood advisors and move in a sane direction?

It is not only our heart cry, but our deepest prayer.