The Arrogance of a Democratic Administration and the Misguided Republican Senators 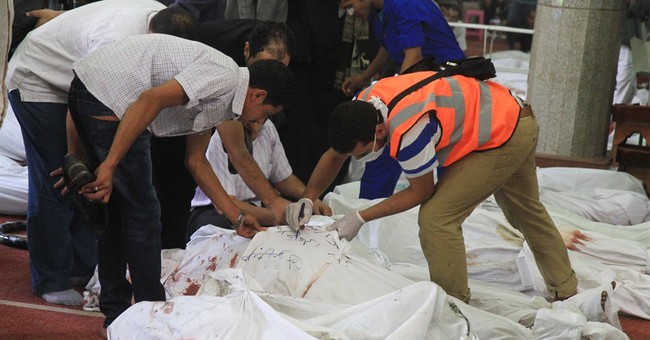 You would have to be living on Mars to not realize that US foreign policy, especially our Middle East policy, is a disaster of global proportions.

Prior to the 2008 presidential election, Mr. Obama assured Americans that he understood Islam, Muslims loved him, and he would bring peace in our time. Instead, we now watch carnage on our televisions — rivers of blood flowing from the streets of Baghdad, to Benghazi, Damascus, and now Cairo.

With the help of two misguided Republican senators, John McCain and Lindsey Graham, the Obama Administration has managed to make America despised, disrespected, and mistrusted across the region. They are either ignorant of the Islamic ideology of world domination, or they are too arrogant to realize this problem defies their assumed “wisdom.”

The Obama Administration has repeatedly said that democracy took hold in Egypt through a free and fair election. That is a mirage.

Our government has not only reinforced that mirage — as it is parroted by the Western media — it has created the clear impression that we are in lock step with the Muslim Brotherhood camp.

During the mere twelve-month reign of the Muslim Brotherhood, we watched:

§ Christians were beheaded in broad daylight

§ Minorities, including Shiites, slaughtered in the streets

§ Al Qaeda moving 3,000 of its Afghan fighters into the Sinai Desert

§ Massive amounts of arms flowing into Egypt from Libya and Turkey

§ The firing of non-Islamist government officials (highly qualified Muslims), who were then replaced by Muslim extremists and known terrorists

§ US government funds landing in the laps of Muslim Brotherhood leaders

But the most egregious act of all was the silence of the White House and the State Department. They did not utter a mumbling word about any of those atrocities.

It comes, then, as no surprise that former Egyptian President Morsi refused to meet with the head of the Egyptian armed forces when the people rose up against the Muslim Brotherhood’s government. He felt like he had Obama in his back pocket.

As for Libya, the arms sent from the United States to Libyan rebels were used to kill four Americans, including our ambassador. Then, under the protection of the Muslim Brotherhood and the silence of the US government, tons of those armaments found their way into Egypt and the Sinai region. There, they were used to kill more than 100 Egyptian police and army officers.

The terrorists in Sinai, under the leadership of Osama bin Laden’s former doctor, intended to destroy Israel. But first they needed to neutralize the Egyptian army. Remember, those were the weapons that Senators McCain and Graham insisted on supplying to the Libyan rebels.

To make matters worse, the administration came to the aid of Muslim Brotherhood supporters, who set up camps in the middle of suburban Cairo. There, they killed and tortured their opponents. While those “campers” called for the killing of Christians and government officials, the White House and State Department simply touted the line that they had a right to a peaceful demonstration.

It turns out that a large enough stockpile of weapons was inside the camp to destroy the country. If not for the sacrificial intervention of the police, armed only with tear gas, that might have happened. When the police finally moved in after six weeks and removed the armed terrorists, the White House objected and strenuously demanded that the protestors’ rights be respected.

So the Obama Administration needs to do some soul searching, if it has a soul.