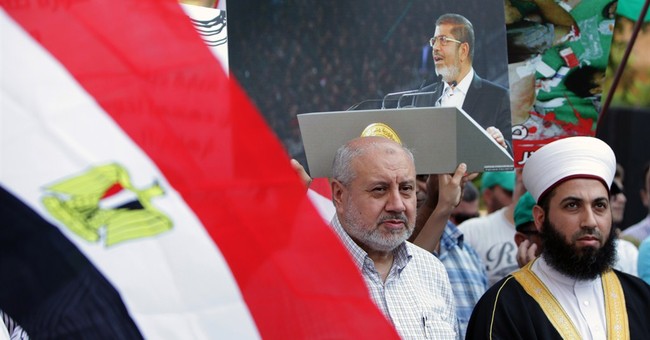 That’s a lofty title, but bear with me. I know the country—not just through being Egyptian, but through empirical and academic knowledge as well.

The Muslim Brotherhood was formed in 1928 by Hassan al-Banna, an elementary school teacher. The organization’s stated aim was to overthrow British Imperialism and establish an Islamic state in Egypt—a state that would eventually encompass the Arab world. Although the British have since departed, the remaining goal has never changed.

Many years later, Hosni Mubarak, the third successor to Nasser, came to power. Mubarak, head of the Egyptian Air Force during the 1973 war with Israel, took over in 1981 after an Egyptian Islamic Jihadist assassinated his predecessor, Anwar Sadat.

In dealing with the Muslim Brotherhood, Mubarak implemented what could be called a “bait and switch.” Sometimes he arrested their leaders (including recent president Mohammed Morsi). Other times he allowed them to occupy up to 25 percent of the seats in the Egyptian parliament—all along knowing that he couldn’t trust their deadly ideology.

But in January 2011, when the young college-educated masses took to the streets in Cairo, Alexandria, and other cities, the Muslim Brotherhood had to figure out how to respond. At first they stayed on the sidelines, fearing that if those “democracy ideologues” failed, then the Mubarak regime would come after them. But after the secularly-educated young adults succeeded (after paying a heavy price) in ousting Mubarak, the Muslim Brotherhood then jumped on the bandwagon, claiming the revolution as their own.

And who was there to encourage the Muslim Brotherhood? None other than the American administration.

The rule of the Egyptian Army during the sixteen months following Mubarak’s departure turned out to be a disastrous experience for Egyptians. So under pressure from the American administration, they then conducted a so-called “free and fair election.”

There is reason for my cynicism in describing the election that way. You will never learn from the Western media what my friends in Egypt experienced during that “election”.

The contest was between a former head of the Air Force, General Shafik (also a one-time prime minister under Mubarak) and a third-choice Brotherhood candidate named Mohammed Morsi. During the election, thugs took over many of the polling stations, particularly in Upper Egypt. They told Christians that if they wanted to live, they better not go inside and vote. Incidentally, they did the same thing during the referendum on the new constitution, which the Islamists concocted as a prelude to Sharia.

People who can do simple math will discover that less than 15 percent of the population voted “yes” on that referendum. But that’s not the entire story.

That is the nub of it all.

Ever since September 11th, American politicians on both sides of the aisle have developed this narrative that says: “we should fight Islam with Islam.” Meaning: “If Islamists are allowed to rule and are allowed to taste the nectar of power for which they have longed for decades, they will turn away from terrorism. Let the Islamists rule, and we all shall live in peace.”

Well now we know how that American experiment turned out.

Twelve months of Islamist rule have proved to Egypt’s vast Muslim population that the misguided policy of naïve American politicians has only kicked the can of terrorism down the road.

Immediately after taking office, Morsi began replacing moderate Muslim professionals within the government with Brotherhood cronies with no knowledge of how to govern.

During the ensuing twelve months, the economy tanked, poverty rose to an all-time high, and the Brotherhood’s business brokers took all incoming foreign money—whether for business or aid—and distributed most of it among themselves. They then passed on a few crumbs to their followers, some of whom are still demonstrating against the popular uprising and the removal of their sugar daddy. One Egyptian news anchor claimed that Morsi’s net worth had risen from nothing before the election, to nearly 2 billion Egyptian pounds today.

No wonder that 30 million people—mostly Muslims (many of whom voted for Morsi in an effort to reject the Mubarak dictatorship)—took to the streets. They realized that they had just replaced a beneficent dictator with a far worse fascist one.

Of course, now the Muslim Brotherhood is promising a reign of terror to include killings and suicide bombings. So much for avoiding bloodshed.

To add insult to injury, Morsi would not allow the police or the court to prosecute known Jihadists in the country. And to top it all off, when 3000 Jihadists from Afghanistan and Libya made their home base in the Sinai Desert, he told the Egyptian Army not to interfere with them in spite of the repeated attacks and killings of Egyptian soldiers by these foreign Jihadists.

But I have no doubt that the people of goodwill in Egypt will prevail. They have learned that freedom and Islamist rule cannot co-exist. Something that the Western media and the U.S. government would be wise to finally figure out for themselves.