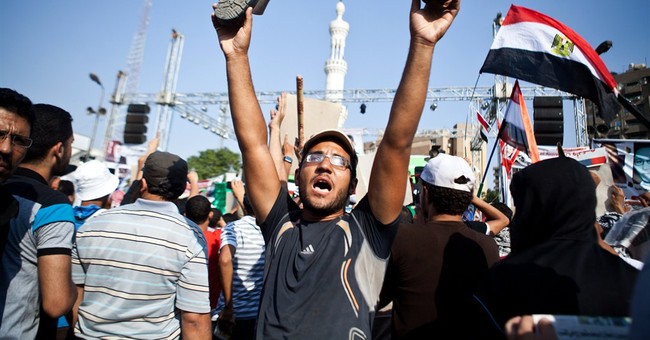 In 2011, President Obama quickly called on President Mubarak to acquiesce to demonstrators’ demands and leave office.

With Mubarak out of the way, Obama proceeded to support the outlawed Muslim Brotherhood, who succeeded in stealing the revolution.

Obama’s support extended to an ex-con named Muhammad Morsi. By his own admission, Morsi was in prison during the January 25 demonstration. But he was in contact with members of Hamas, who broke into the prison and freed Morsi and other Muslim Brotherhood prisoners.

When Morsi ran for the presidency, Obama continued to support him, even when it was clear that the close election was rigged by dubious tactics.

With six possible Muslim Brotherhood operatives working in the Obama administration, and Obama’s full-fledged support of Morsi, you would think that Egyptians would be in love with Obama. But the deeply troubled Egyptian public is in no way enamored with this White House. Quite the contrary.

More than 40 percent of Egyptian citizens currently must survive on about $2 US per day. Lines to purchase gasoline stretch on for hours. The lines for a tank of propane—needed for cooking and other necessities of life—extend for up to nine hours. Electricity is cut off from 2-3 hours per night.

When the Egyptian masses finally couldn’t take it anymore, 22 million people signed a petition to recall Morsi’s election—more than twice the number of people than originally voted for him.

Then something totally unprecedented happened: 30 million people took to the streets. The largest mass demonstration in human history.

The Egyptian Army had tried on many occasions to mediate between President Morsi and the opposition. But Morsi autocratically and arrogantly refused to talk to anyone other than his masters in the Muslim Brotherhood headquarters.

In order to avoid the stigma of a coup, the military leaders met with a cross-section of the Egyptian population and religious leaders, including Islamists. As a result, they produced a wise plan calling for an election and appointing the chief justice of the Supreme Court as the interim president.

But here is the irony: while millions of Egyptians responded to Morsi’s ouster by joyfully dancing in the streets, the Muslim Brotherhood advisors in the White House helped Obama produce a non-descript statement. With his wishy-washy message about those who are democratically elected, Obama confirmed in Egyptian minds that he is in the pocket of the Muslim Brotherhood.

It is downright depressing to see the leader of the free world unable to comprehend the Islamic understanding of democracy. To the Islamist, democracy means “one man, one vote, one time.” Once they have their power, there’s no reason to ever have another election.

Thank God for the wise and courageous Egyptian people who comprehended that plan and stopped it before it was too late.

And thank God for the persecuted Christians in Egypt who have cried out to God while withstanding injustice during the reign of the Muslim Brotherhood. As a committed Christian, I believe God has heard their cries, even when President Obama covered his ears. They have set an example for every harassed believer in the world, including in America, to pray and hope that God will hear our prayers.