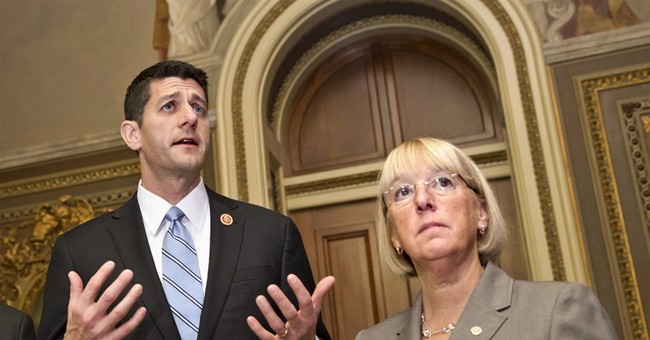 House and Senate budget conferees have begun meeting in an attempt to head off another potential government shutdown when the latest continuing resolution expires, on January 15. In theory, the committee is supposed to report no later than December 13, but few on Capitol Hill expect them to come up with a deal by that deadline. As usual, the two parties are at loggerheads over taxes and spending. The Democrats want more of the former and none of the latter; for Republicans, it’s the reverse. Another crisis looms.

But there is a way that the two parties can come together to solve this problem, if members are willing to compromise.

It is important to understand that a compromise doesn’t require new taxes. According to the Congressional Budget Office, revenues will return to their historic average without any new tax hikes. And, between the new taxes in Obamacare and the fiscal-cliff deal last December, Democrats have already pushed through more than $2.8 trillion in new taxes over the next ten years. The basis for any budget compromise must come on the spending side.

And there’s reason to believe that this can be done. Over the last few years, both Democrats and Republicans have suggested ways to cut spending, only to be blocked by the other party. Now, however, is the time for both parties to cut programs even if they are championed by special interests in their parties. There can be no more “sacred cows.”

To show how this could be done, scholars at the Cato Institute have put together a plan that balances the budget without tax increases and reduces our dangerously high debt burden, by cutting $3 trillion over the next ten years. It builds on good ideas from both Republicans and Democrats, liberals and conservatives, to expand individual freedom and reduce the burden of government.

Cut Corporate Welfare: For too long both parties have endorsed giveaways to major corporate interests. This is not even a question of dubious tax breaks — which, it can at least be argued, allow people to keep more of their own money, even if the tax breaks are distortionary — but rather of direct payments and subsidies. Such corporate welfare has nothing to do with capitalism or free markets. Among the worst examples are agricultural subsidies, included in the “farm bill” currently making its way through a conference committee, and energy subsidies, including such notorious boondoggles as Solyndra. Phasing out farm and energy subsidies would save $160 billion over the next ten years.

More Privatization: Many things done by government today can be done more efficiently by the private sector. For example, President Obama has suggested privatizing the Tennessee Valley Authority. Other candidates for privatization include Amtrak, the Corps of Engineers, federal dams, airport screening, and air-traffic control — which would save at least $110 billion.

Trim the Intelligence Budget: In the wake of the NSA scandal, Americans have become increasingly aware of abuses by the intelligence community. The budgets of the CIA, the NSA, and other intelligence agencies have become bloated with spending on vast and often intrusive data-collection efforts and armadas of drone aircraft. These efforts, Cato and others argue, have not made us safer. Cutting intelligence spending by 25 percent would not make us more vulnerable, and we’d save $110 billion.

End the Drug War: Experts across the political spectrum increasingly recognize that the War on Drugs has been as big a failure as the War on Poverty. Moreover, law enforcement is far more properly a state and local matter, not a federal one. Yet the federal government spends billions of dollars every year on fruitless efforts that harm civil liberties, foment violence, and do little to actually curb drug use. Ending the federal drug war and returning drug policy to the states, where it belongs, would save $110 billion.

Reform Social Security: Social Security is the world’s largest Ponzi scheme, piling up enormous debts that our children and our grandchildren will eventually have to pay. The latest estimates from Social Security’s trustees suggest that the program’s unfunded liabilities exceed $23 trillion. Meanwhile, spending on Social Security Disability Insurance has soared, increasing by $84 billion since 2000, with rising levels of fraud and abuse. Eventually we should move to a system of personal accounts for retirement and disability, but meanwhile we would save$640 billion by indexing initial benefits to prices rather than wages, modestly raising the retirement age, and trimming the disability rolls by 25 percent.

Stop subsidizing state governments, especially for education: Washington runs more than 1,100 programs that provide funding to state governments. That’s not federalism, it’s a perverse form of welfare that subsidizes big-spending state governments. Among the worst of these programs are education grants, which increase federal control over education while stifling state and local innovation. Phasing out federal subsidies for K–12 schools would save $180 billion and free states to improve the quality of their own education systems.

Reform and Reduce Welfare: The federal government currently funds 126 separate anti-poverty programs, at a cost of more than $668 billion per year. Yet poverty rates remain roughly where they were in 1965, when Lyndon Johnson first declared war on poverty. This vast array of aid programs would be better handled by state and local governments and private charities. Programs such as food stamps should be turned over to the states. Phasing out just this one welfare program (federal food stamps) over ten years would save $400 billion.

End Military Overreach: National defense is a constitutional responsibility of our government, in many ways the first responsibility of a national government. And no one should forget that it is a dangerous world and that the United States has very real enemies. But too many lawmakers have used defense spending as little more than a jobs program, demanding that weapons systems be built, even when the Pentagon says those systems are not needed, simply because they are built in the lawmakers’ districts. Moreover, the Constitution envisioned a military to “provide for the common defense” of the United States, not one that serves as the world’s policeman. Indeed, many observers believe our penchant for foreign intervention makes us less safe. Congress should reduce overseas military commitments, avoid foreign wars, and create a leaner force structure. Making reforms to meet the budget caps for 2014 and beyond could save at least $200 billion.

Reform Medicare: Medicare spending is the largest factor pushing the budget into crisis. Even the most conservative estimates suggest that Medicare faces unfunded future liabilities of more than $42 trillion. Other estimates warn that future liabilities could top $88 trillion. Raising premiums and increasing cost-sharing would save$330 billion. That’s a good start, but policymakers should go further and restructure the program by directing payments to enrollees, not insurers or providers. That would generate greater choice, spur innovation, improve access to care, and generate even greater savings beyond the ten-year budget window.

Block-Grant Medicaid: Given the enormous problems facing Medicare, it is easy to ignore those of Medicaid, the government’s second-largest health-care program. Yet Medicaid’s finances are nearly as bad, adding to the federal deficit today, with huge shortfalls looming on the horizon. And, unlike Medicare, Medicaid is also an increasing burden for state budgets. Instead of the current open-ended matching grants that have spurred overspending at both the federal and state levels, Congress should give each state a fixed amount of funding and free them to experiment with better ways of providing care for the needy. Limiting the block grants’ growth to 5 percent a year would save $760 billion.

As of this month, our national debt tops $17.1 trillion. The time has long since passed for Congress to get serious about cutting spending. That means we must be willing to cut “our” spending as well as “their” spending. The cuts we recommend will almost certainly arouse the ire of powerful interests and constituencies. Others may legitimately have better ideas for what and how to cut. But in the end, the only way to reduce the size, cost, and intrusiveness of government is to cut spending. And the only way to cut spending … is to cut spending.