The Message from Massachusetts 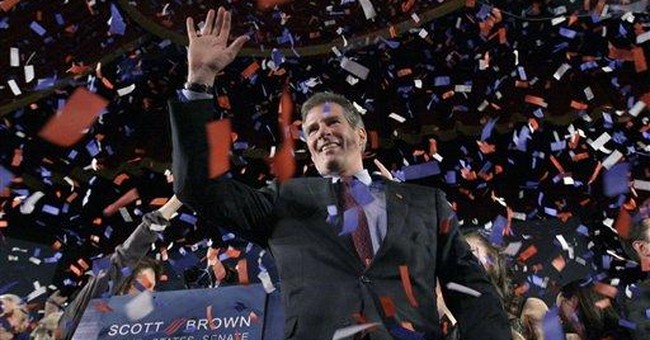 Scott Brown’s stunning upset in the Massachusetts special election may have done what the best policy arguments could not – defeat the Democrats' plans for a massive government takeover of the U.S. health care system.

Democrats will undoubtedly offer a variety of excuses for Brown’s win. The Democratic nominee, Attorney General Martha Coakley, was a poor candidate. The “political climate” was bad. The dog ate their ballots. But in reality, there can be no denying that this election was a clear cut rejection of the Democratic health care bills.

There were no blurred differences on this issue. Scott Brown made his opposition to the bill a centerpiece of his campaign. He promised to be the 41st vote to sustain a filibuster and kill the bill, even signing autographs as “Scott41.” Coakley, on the other hand, pledged to vote for the bill.

The issue was featured in ads, debates, and public discussions. In the end, according to polls, in the home of Ted Kennedy, more than half of voters opposed the version of health care reform being rushed through Congress. Voters knew what they were saying. And what they were saying was a resounding “No!”

What do Democrats do now? House Speaker Nancy Pelosi says that they will pass health care reform “one way or another.” Those “ways” are:

Hurry up and stall: New York Democratic congressman Anthony Wiener both named and defined this strategy. Democrats would slow-walk certification of Brown’s victory, preventing him from taking his seat in the Senate. Massachusetts Secretary of State William Galvin has hinted that he won’t certify election results for at least the 10 days that local officials have to report on absentee and overseas ballots and has noted that state election law gives him as long as 50 days beyond that. Meanwhile, Pelosi and Harry Reid will rush their negotiations to merge the House and Senate bills, allowing the appointed interim Massachusetts Senator Paul Kirk to vote on the bill before Brown takes his seat.

Democrats legitimately fear that such a blatant disregard for the democratic process would spark an enormous backlash. There would be no way to pretend it was anything other than the most corrupt power politics. After previous special elections the winners have been seated within days. In fact, when Kennedy first won the seat in a 1962 special election, he was sworn in the very next day. Would Democratic moderates, already frightened by the election outcome, be willing to go along with such an approach?

The House Surrenders: Democrats could try to avoid a Senate vote altogether by having the House simply pass the already Senate approved measure. But that would require the House to accept the Senate bill with no changes at all. Pro-life Democrats like Bart Stupak (D-Mich.) would have to accept much weaker Senate restrictions on government funding of abortions. Liberals would have to accept the so-called “Cadillac tax” on high value insurance plans - without the exemption demanded by labor unions. And what about nervous moderate and blue dog Democrats? Are the Massachusetts results going to make them more or less likely to go out on a limb for health care reform? Remember, the House only passed their bill by a three vote margin, and one of those, Rep. Robert Wexler (D-Fl.) has since resigned his seat.

Let It Snowe: Democrats could try to reach a compromise with Republican moderates like Olympia Snowe of Maine. Snowe did vote for a version of health reform in the Finance Committee and has spoken positively of the need for reform. But she also voted in favor of a resolution declaring that the individual mandate was unconstitutional and has raised a number of other objections. Any bill she agreed to would have to be substantially different than the ones currently being considered. That would almost certainly jeopardize already tenuous support from liberals. If the current Senate version is hard for them to swallow, just imagine how they will react to one watered down even further.

Go for 51: The last, desperate gasp would be to use an arcane procedure known as reconciliation to pass health care reform with just 51 votes. But doing so would require Senate Democrats to overcome all manner of procedural hurdles. Reconciliation cannot be used for policy as opposed to budgetary issues. That means Democrats would have to drop some of their more popular proposals like the ban on preexisting conditions. They would be left with a bill that did little more than expand Medicaid and other subsidies, raise taxes, and cut Medicare. How popular would that be?

So far Democrats have been willing to do almost anything, cut any deal, sacrifice any principle, to force this bill through. But they may be running out of options at last. And for that, we can thank Scott Brown and the voters of Massachusetts.