No, Really, It's Not Government-Run! 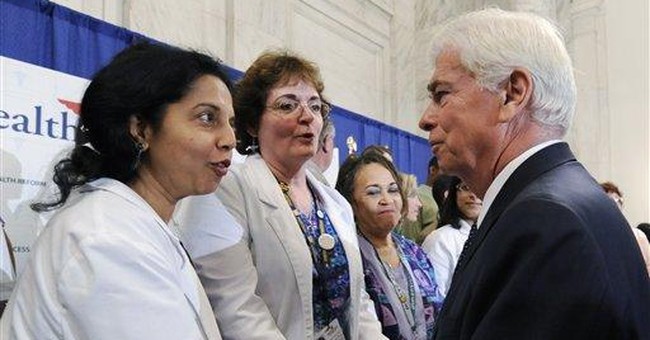 Faced with rising opposition to a so-called "public option" in health care reform, some Democrats are floating the idea of establishing health insurance "co-operatives" as an alternative. Republicans like Sens. Olympia Snowe (Maine) and Charles Grassley (Iowa), who are desperately devoted to the idea of bipartisan compromise, have pronounced themselves “intrigued” by the idea.

A closer look suggests that the only thing intriguing about the co-op alternative is whether it is a completely meaningless construct or simply camouflage for the “Public Plan” option.

A "co-op" can be defined as a business owned and controlled by its workers and the people who use its services, in this case presumably the people whom it insures. In that sense, government provision of some sort of legal framework or seed money to help establish health insurance co-ops seems relatively harmless but also relatively pointless. The U.S. already has some 1,300 insurance companies. Adding a few more would accomplish...what?

States already have the power to charter co-ops, including health insurance co-ops. In fact, health care co-ops already exist. Health Partners, Inc. in Minneapolis has 660,000 members and provides health care, health insurance and HMO coverage. The Group Health Cooperative in Seattle provides health coverage for 10 percent of Washington State residents. PacAdvantage, a California co-op, covers 147,000 people. By all accounts the people insured through these co-ops are happy with their choice. But there is no evidence that they are significantly less expensive or more efficient than other insurers.

And there's the rub. Supporters of government-run health care have no intention of letting the co-ops be independent enterprises that operate by the same rules as other insurers. This is not really about creating more choices and competition. In fact, Sen. Charles Schumer (D-N.Y.) makes it clear, for example, that the co-op's officers and directors would be appointed by the president and Congress. He insists that there be a single national co-op. And Congress would set the rules under which it operates. As Sen. Max Baucus (D-Mont.) says, "It's got to be written in a way that accomplishes the objectives of a public option."

Moreover, several previous attempts by governments to set up co-ops have, in fact, failed. Perhaps the largest such failure was the Florida Community Health Purchasing Alliance, which was set up by the State of Florida in 1993, and at one time covered 98,000 people. It was unable to attract small business customers and ultimately went out of business in 2000. Does anyone really believe that a Congress that is busy bailing out banks and automobile companies because they are ‘too big to fail” is going to sit idly by while one of these new co-ops suffers a similar fate?