Wait… Castro Used to Be the Bad Guy? 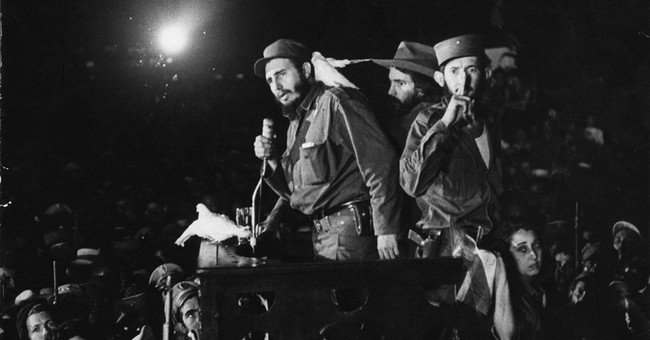 Wow… It’s been 56 years since the American government recognized the “new and improved” Cuban government. Just six days after the pro-American (and mafia-friendly) Fulgencio Batista stepped down as dictator of the Caribbean nation, the US officially recognized the island’s new government. Not unlike Obama Administration officials, the Eisenhower Administration felt that an olive branch and a hug might help the Soviet wannabes on the island-nation work with us capitalist pigs.

Fidel Castro, the Stalinist rebel who helped overthrow Batista, was a known communist… We didn’t want those kind of people working in Hollywood; but apparently we weren’t initially too opposed to them running an island. In defense of the US officials who fought for recognition of Cuba’s new leaders, a bunch of banana republics in the area already cheered on Che Guevara and Fidel – why on earth should a of free nation 90 miles away object to such a popular communist revolution?

To be fair, there was a fair amount of concern among US officials. I mean, we were kinda being harassed by a group of commies in a third-world empire halfway across the globe… We really didn’t need a Marxist sympathizer in our backyard. But Secretary of State John Foster Dulles helped ease our fears by pointing out that Fidel wasn’t in a position to build a worker’s paradise 90 miles off of Florida’s coast… Heck, Castro wasn’t in charge of the government (some guy named Urrutia was “officially” in charge), how could he possibly rock the boat?

For those of you who haven’t picked up a copy of 13 Days, Dulles was a little off base. It wasn’t long before Fidel took the helm of government. Shockingly, with a communist hero running things, relations didn’t blossom between the US and Cuba. Castro was sworn in as premier in February 1959, and he immediately began “nationalizing” (socialist speak for “stealing”) American-owned properties, enterprises, and assets.

Not unlike Washington DC and the auto-industry.

Before anyone even realized what was happening, Castro had nationalized most of the island’s industry, abolished private property, and directed the government to regulate wage controls. (No, Elizabeth Warren… This is not a 2016 platform.) Aside from some crude American businessmen (translation: mafia families, industrial giants, and a handful of US Senators) who split town on the first of January 1959, everyone was caught off guard by a commie acting like – well – a commie.

Less than two years later, the US severed diplomatic relations with Cuba. Soon JFK unleashed the Bay of Pigs invasion. (Um… That also didn’t work out quite as planned.) Eventually Russia parked a few nuclear missiles on their newest satellite real-estate, and Kennedy responded by placing an embargo on the shifty little Stalinist state south of Florida.

Of course, now we are “normalizing” relations with the Castro brothers; which only really makes sense if we feel like rewarding 56 years of oppression, torture, political discrimination, and the killing of gays. (Seriously… Being gay is almost as bad as being a capitalist in Havana.)

When asked about Cuba’s refusal to release 53 political prisoners as part of Obama’s new “let’s work with communists” pact, the State Department essentially said “um… I guess we’ll look into it… If we have to.” But yeah: I’m real glad we’ve opened up to the Freedom-crushing pupils of Stalinist communism. That’s clearly a big step forward for the human condition, right?

I’m also pretty sure that in 1959, when Americans watched a Caribbean island fall to rebel forces, they never thought we’d be talking about “getting back together” with a bunch of communists who aimed nuclear missiles at our cities. Even John Dulles would probably have a little reservation about giving the Castro bros a pass on 56 years of Marxist tyranny.

Then again… Cuba might be a nice place to play golf for our Commander in Chief. I guess everything has a trade-off.