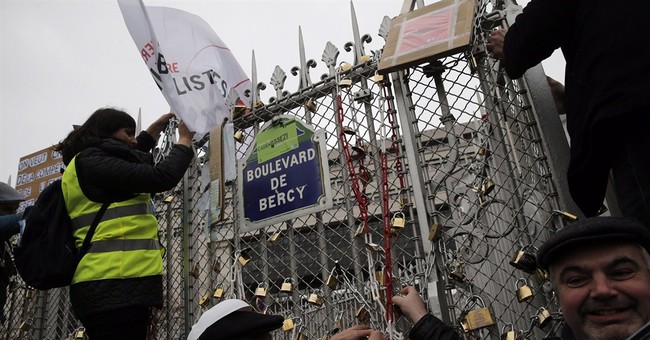 Quick, someone send France a copy of Atlas Shrugged!

Well… Actually, it almost looks like someone already has. French business owners will be spending this week taking to the streets in protest of the Socialist government’s burden on private business. Deciding that “workers” shouldn’t have all the fun when it comes to picketing and protesting, French bosses marched through the public squares in Paris, Marseille and Toulouse. It won’t be long before unemployed French citizens begin asking “Qui est John Galt?”

Now, don’t get me wrong: I’m not one of those guys that bullies everyone he knows into wading through a thousand pages of Ayn Rand’s self-righteous ideological dribble (which she cleverly disguised as an incredibly boring novel). In fact, I have a general distaste for the arrogant atheist who packed her liberty-movement manifesto with objectivist pomposity. William Buckley once said he had to flog himself to get through Atlas Shrugged. I envy the comparative ease with which he was able to muddle through Rand’s intrinsic aversion to brevity.

Of course, my personal qualms with Ayn Rand’s work aside, she certainly has earned her place in the American psyche, liberty movement, and Laissez-Faire economic outlook. The driving concept behind her legendary book (which could have been very effective as a novella, or possibly a political cartoon) is an impressive foray into individualism. And this week we see the landscape of Atlas Shrugged taking shape in the socialist utopia of France as business owners begin to wake up to Big Government's stranglehold.

Having reluctantly acquiesced to the consideration that the cost of doing business was too high, the French government decided to reduce employment taxes. Then the Socialists promptly chastised business owners for failing to hire more people… Those silly entrepreneurs seem to have been under the impression that their businesses are actually privately owned. Don’t they know their only value in society is to provide the public with 35 hour work weeks, a month of paid vacation, a month of paid sick leave, and mandatory compensation schedules? </End SarcasmFont >

In addition to punitively high taxes, business owners are concerned over a slew of Socialist regulation designed to empower the employee, at the expense of the employer. According to CNBC:

[Business] concerns center on three main issues: Compulsory payments that businesses have to make for workers doing certain shifts, rules stating that they cannot employ part-timers for less than 24 hours a week and new regulations that will force companies of less than 250 employees to inform their workers before they negotiate the sale of a business to new owners.

In typical Socialist fashion, even the employers decided to first form a union before expressing their dissatisfaction with the French government's most recent interpretation of Marx. (I haven’t double checked this, but I wouldn’t be surprised if labor unions also belonged to a larger union, designed specifically for unions.) Their organized protests – complete with visual aids such as chains, locks, and red tape – will last all week. Worker’s unions are, predictably, upset with all the attention small business owners are getting right now, and will likely plan some counter protests.

And so, I reiterate my reluctant suggestion to initiate the French citizenry to Ayn Rand. Following the lead of their entitled, spoiled, and often underworked labor force, perhaps these owners of capital should simply call a strike. Close up shop, and kick back… After all, we’re talking about socialism. If you fail to produce any value, there will always be someone the government can tax on your behalf, right?