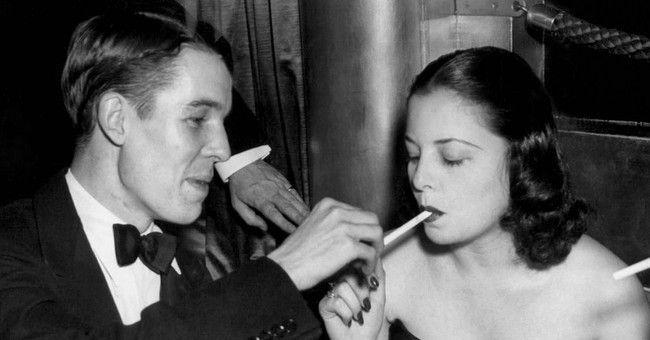 The Nanny State is getting out of control. A small town in the heart of the People’s Republic of Massachusetts is toying with the idea of banning the sale of any tobacco product. Did I miss something on election night? Is Nanny Bloomberg now the mayor of Westminster, Massachusetts?

The clones of Bloomy, who run Westminster’s Board of Health, had scheduled a public hearing on the proposed ban for Wednesday the 12th. While the ban is a grotesque expansion of statism upon private business, it has proven to be a good motivator for increased involvement in local civic action.

According to the Boston Globe, roughly 500 people showed up to protest the prohibition of tobacco in Westminster. And the pro-choice protestors of government-mandated behavioral modification were apparently a pretty vocal group. After 25 minutes the Board of Health Chairwoman, Andrea Crete, was forced to close the hearing early due to the visible outrage of citizens.

“The crowd’s getting out of control and the room’s filled to capacity,” Crete said. “We don’t want any riots.”

Yeah, seriously… People in Massachusetts starting shooting Brits because of a tax on their breakfast beverage a couple hundred years ago; and you’re going to mess around with something as desperately addictive as nicotine? While you’re at it, why don’t you just start passing out muskets and powder to the rabble?

But it’s not as if the crowd was made up of 500 Lucky Strike and Camel smokers… As it turns out, even non-smokers were agitated by the Nannyism of Westminster’s Board of Health. According to PJ Media:

“I find smoking to be one of the most disgusting habits anybody could possibly do. On top of that, I find this proposal to be even more of a disgusting thing,” resident Kevin West said during the session, according to CBS Boston. Store owner Brian Vincent, who organized a petition drive, gathering more than 900 signatures, asked, “Having other adults decide what legal item we’re not allowed to consume just makes you wonder: If this passes, what could be next? Sugar? Bacon?”

Nah… They’ll tackle school lunches and high-capacity sodas before they touch our beloved bacon. But, I think your point is well taken, Brian. Of course sucking down a few cancer sticks qualify as suicidally stupid. But, what right is it of the government to regulate the population into good health?

I always thought that the right to make bad decisions was part of freedom. But, I guess the folks in white lab coats on the Westminster Board of Health disagree. A little totalitarianism (remember, this is a bureaucratic decree) will apparently help save the poor citizens of Westminster from their own foolish decisions.

Now, I hate to point out the obvious, but it has to be done: Prohibition doesn’t have a great track record. I mean, I don’t imagine a repeat of 1929’s St Valentine’s Day Massacre over a small town’s decision to ban tobacco products… But I also don’t expect the average Westminster smoker to look at the empty shelves in his local smoke shop, and think to himself “maybe I’ll just start by some bubble gum instead.”

Just ask New Yorkers: There are ways to get around those pesky government regulations. In fact, the Federal Bureau of Alcohol Tobacco and Firearms estimates that black market cigarette smuggling is a bigger racket in New York than heroin dealing. And, to be fair, Mike Bloomberg only focused on making life difficult for smokers… He never actually attempted to banish the product from the otherwise pristine (cough*sarcasm*cough) island of Manhattan.

Personally, I miss the old days when things like this were hashed out over a nice cocktail (Templeton Rye Old Fashioned?) and a Maduro blend cigar… Maybe we should ship a box or two to Andrea Crete.