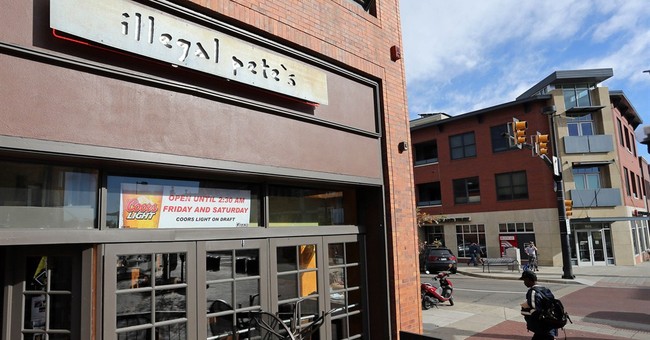 It is becoming pretty obvious that the American Left is virtually bankrupt of tolerance or understanding. Under the guise of political correctness a group of hyper-sensitive liberals are petitioning a Colorado restaurant to change its name. Since the mid 1990’s, Pete Turner has expanded his Boulder-based restaurant to six locations along the Front Range; but he might have to consider rebranding his business because a bunch of self-victimized leftists are throwing a hissy fit. According to the Coloradoan:

Three weeks shy of opening his newest Illegal Pete's restaurant in Old Town Fort Collins, restaurant owner Pete Turner came to Fort Collins on Wednesday to listen to a crowd of concerned residents who asked that he change his business' name.

Apparently, the name “Illegal Pete’s” might offend illegal immigrants. The fact that illegals are merely labeled as illegal because they happen to be in the country illegally doesn’t seem to stem the tide of politically correct intolerance shilled out by the Left. Not surprisingly, the protestors in Colorado also seemed stunningly uninterested in the fact that the owner intended no disrespect when naming his restaurant:

The name Illegal Pete's, Turner said, is a literary reference to a bar in a novel he read as an English major in Boulder. "Pete" also refers to his own name and his father's. When he started the restaurant in 1995, Turner hoped the name would be ambiguous enough to spark people's interest, perhaps referring to counterculture activity.

But that didn’t stop 30 or so perpetually offended leftists from convening a meeting, and trying to convince Turner to change the business’s name. Their only requirement was that his private business not be tainted with the use of the dreaded “I-word”. (Yeah… That’s how they referred to it.)

"Since I know the context, and I have been labeled with (the word illegal), it makes a huge difference to me," said Lucy Gonzalez, 25.

Really? You have been labeled with the word “illegal”? So, I’m guessing it is safe to assume that at one point you, Lucy, were here illegally? Because that’s not exactly the same thing as a racial or ethnic slur. If you find it offensive that a clinical definition of your immigration status was used to describe your immigration status, there are easy ways to change that… For example, you could immigrate legally.

Colorado State University assistant English professor Antero Garcia explained that "The restaurant will be located in the same area that current Fort Collins residents remember often seeing signs saying 'No dogs or Mexicans.' It is under this legacy of American racist practices that the name Illegal Pete's becomes unacceptable."

Wait… “American racist practices”? Oh. I guess Americans own the patent on racism, right? (I guess it would be useless to point out to Garcia that such practices are no longer allowed, because of American values and practices. Right?)

According to the CSU assistant professor, we’re supposed to demand that a private business change its brand because some over-sensitive “politically correct” activists assume the word “illegal” is a dog-whistle for racism. Simply not going to the restaurant apparently never dawned on these activists…

Maybe the most telling part of the hour and a half long meeting last week was how it ended. Turner had showed up to listen to the concerns of locals, and defend the name of his restaurant. But, at the end, Garcia made it clear:

"We can be mobilizing ourselves either to celebrate or to protest."

Now, is it just me, or does that sound like a not-so-veiled threat? I guess, contrary to the claims from the Left, a “discussion” is pretty much not an option. Only complete submission to the intolerant demands of the “politically correct” will suffice for people like Garcia.