It’s Not Obama’s Fault… He Was Too Busy Golfing. 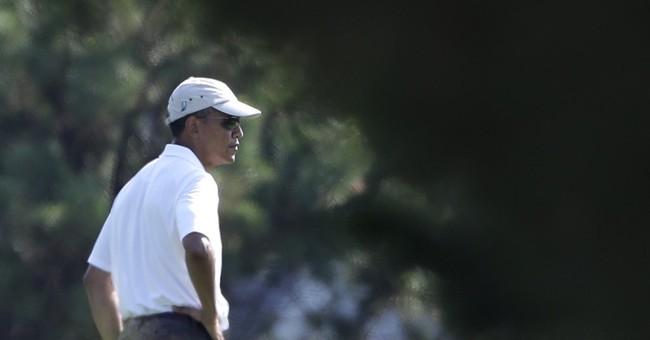 The President is back at Martha’s Vineyard… I know. To some of us, it felt like he never left. Heck, on some level, a lot of us wish he never would leave there. But, he is back; after a brief 48 hour return to DC for some “very important” business. According to the Hill.com:

President Obama went back to his vacation on Martha’s Vineyard Tuesday evening following less than 48 hours in Washington, leaving people puzzled over why he came back in the first place. Obama’s two days in Washington were mostly quiet, and concluded with the President receiving his daily national security briefing in the morning, and joining Vice President Biden to huddle with members of his economic team in the afternoon.

Whoa… Hold the presses! He has an economic team? This is news worthy. After 11 million Americans gave up looking for work, a first quarter GDP contraction, and overall anemic economic growth (not to mention disappearing household wealth, and non-existent household income growth), it’s good to see that Obama has finally decided to scrap together a crack economic team… Of course, it is led by Joe Biden; so it might be a little premature to put the news on Drudge.

So, aside from meeting with the apparently hapless economic team (which, if headed by Joe Biden, is roughly as useful as a neuro surgeon with palsy), what was the President up to on his 48 hour trip to DC? Well… Apparently he attended a party. That’s obviously a vital dimension to restoring the shining city on a hill, right?

The most unusual deviation from a normal day at the White House was Obama’s dinner Monday night at Sam Kass’s home… It’s possible that the party may have been a celebration of Kass’s impending nuptials to MSNBC host Alex Wagner.

Don’t get too critical. Bachelor parties are important components of male life. Especially when it is connected so closely to a member of the Obama-friendly media. Of course, there are more Democrat-friendly theories floating around the interwebs:

One possibility is that Democrats were simply wary of the president taking a full two-week vacation ahead of November’s midterm elections.

Right… A two day break from a two week vacation is far more advantageous for public relations. I know that when I take a long vacation, I’m always sure to schedule an expensive and unnecessary meeting with demonstrably useless panels to give the impression that I’m actually working really hard. (Is this the Presidential equivalent of the “Office Space” tactic of “spacing out” in the mornings?) But, again, let’s not be too hard on the President. After all, it’s kinda hard to run the free world on the golf course, right?

Well… I mean, I assume it would be. Of course the White House Press Jester apparently doesn’t think so. In fact, White House spokespeople have made it quite clear that the “machinery of the Presidency” was with Obama 24/7 in America’s most expensive playground. Heck, Obama even made sure to drag his Attorney General (the incorrigible Eric Holder) with him on his two week getaway; which makes it somewhat curious that he flew back to DC to hold a meeting... With Holder.

Besides, it’s not as if Obama has made it a habit of returning to DC in moments of crises. Aside from the optically challenging fiasco of the “fiscal cliff of doom” in 2012, our Vacationer in Chief has largely been MIA during pivotal world events. When Egypt was in the midst of a coup, the President felt his office was a little too stuffy. When some Jihadist attempted to blow up a plane with an underwear bomb, Obama felt his “office away from home” in Hawaii was sufficient. And when Russia took an exploratory military incursion into Ukraine, Obama’s Key Largo golf game was too intense to put on pause.

Of course, maybe this explains why he is in a hurry to get back the Martha’s Vineyard’s links… Maybe he’s just looking for an alibi: “You can’t blame me for the chaos in the world! I was busy golfing!”