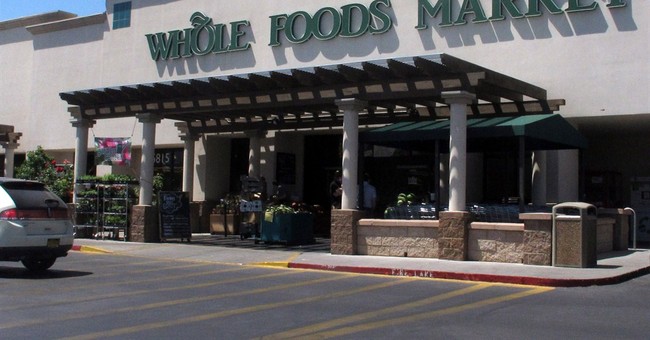 Oh, how exciting… Now you can be a good little liberal, even when shopping for fresh produce and certain off-brand whiskies. According to a politically obsessed hack over at the Washington Post, some other politically obsessed hack has developed an app so you can wander through your daily life without ever losing sight of partisan political squabbles. The new smartphone app allows users to scan the barcode of consumable products in the grocery store, and it divulges the corporation’s political leanings. (I just found out that Fiji Water has switched from heavily Republican, to entirely Democrat… Ugh.)

It’s so nice to see that we’re now able to make dinner ingredients a conversation starter about Ted Cruz and Nancy Pelosi… I suppose, soon, we’ll be calling certain bakery products “racist” because of their political inclinations, right? Good. I was beginning to worry that there might be a couple of moments throughout the day that were not focused on divisive political partisanship. (A sarcasm font! My kingdom for a sarcasm font!)

The app, based on data from Center for Responsive Politics, the Sunlight Foundation, and the Institute for State Money in Politics, is the first rollout from Colbert’s new company, “Spend consciously.” It’s [sic] tagline: “Wouldn’t it be great if you could spend how you believed?” The goal of the company, he said, is make “every day Election Day” through “spending choices.” It’s called Buypartisan.

And, really, who wouldn’t enjoy the partisan experience of Election Day every day? (Does this mean that dead Democrats in Chicago will suddenly be shopping at the local Hy-Vee?) I just can’t wait until some well-intentioned Occupy types start petitioning my local Whole Foods (a libertarian organization, by the way) because they don’t carry a “progressive” brand of eggplants.

The entire notion of “Buypartisan” is a little over the top for me anyway. Oh, sure: There’s a place for spending discretion in our daily lives. Going to football games, for example, is no longer on my list of possible Sunday afternoon activities – but that’s not really because of the NFL’s anti-gun stance or general liberal tendencies. It has a lot more to do with the fact that the metal detectors and pat-downs prohibit me from entering the premises in the first place. (By now you should know: Asking why I don’t just keep my guns at home is an illogical and ridiculous question.)

Boycotts, however, are generally distasteful, useless, and absurdly counter-intuitive to the free market experience that conservatives tend to cherish. I mean, do you like the product? Then buy it. After all, even liberals should be rewarded for creating, selling, and marketing a good product. That’s kinda the advantage of capitalism: It rewards results, not intentions.

Look… I buy most of my wine from Argentina. Most of my vodka comes from Poland. And, just to prove that my household is not one giant nightmare for recovering alcoholics, I buy my cigars from Cuba the Dominican Republic. Heck, some of my guns even came from the former Soviet Union. I don’t really like the politics of any of these places. (Strangely, current and former communist states are very proficient at creating effective and high-quality alcohol, tobacco, and firearm products. Go figure.) But that’s not really the issue…

Are they good products? Are they the best value for the best price? Is there a capitalist, free-market-advocating, or Republican alternative? (In my case, the answers are: "Yes." "Yes." And "no.")

And such is the way with most fiscal conservatives. This, by the way, this is not an insult to conservatives. Truthfully, we on the right just wish to be left alone. It’s the left that feels the need to pressure everyone into their pre-conceived notion of “social justice” or political correctness.

There is a whole list of reasons that people buy the products that they do. Generally speaking, politics isn’t at the top of that list. Thank heaven we now have a hip new app that helps people further segregate themselves into politically defined bubbles, while doing something as mundane as shopping for groceries.

Then again… I guess I did just discovered a new way to irritate my liberal neighbors at our local Whole Foods. This should be fun.