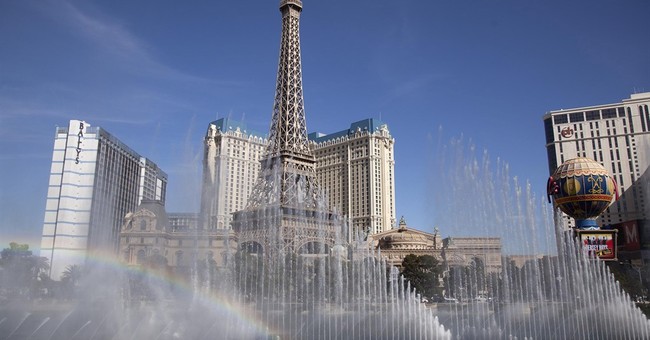 Las Vegas will run out of water. Maybe. Probably. Ya know: eventually. (I suddenly feel like quoting Keynes: “In the long run, we’re all dead.”) Lake Mead, which provides Sin City with 90 percent of its water supply, is slowly drying up as the city tries to weather a 14 year drought. The Telegraph recently ran a story that warned about the precarious future of Lake Mead and (by extension) Las Vegas; and it immediately caught my attention.

Bugsy Siegel’s dream in the desert is, apparently, on the road to dehydration if it doesn’t change something. At least, that’s the message made clear by Nick Allen for the Telegraph. As the drought drags on, the city continues to expand – putting a distinct strain on the lake. That dwindling body of water behind Hoover Dam, as it turns out, is quickly reverting back to the dry desert canyon it was before we built a concrete wall named after some crummy President.

Well… At least that’s the narrative. And, as strange as it might seem, the narrative isn’t new. I mean, it kinda makes sense for water to be a primary concern in the middle of the Nevada desert; but the story seemed oddly familiar as I skimmed it for details. In fact, it is remarkably similar to a story ran in 2010 by the New York Times. The water levels, the projected date of hydraulic Armageddon, and even the concerns over population expansion were almost identical to the New York Times article from nearly a half-decade earlier.

But, c’mon: That doesn’t mean there isn’t a legitimate concern over the water supply for Sin City. Right? After all, we are talking about a booming city in a naturally water-less corner of the US… So is there really a problem? Well… Yeah. I mean, probably:

But before you go blaming Bellagio’s water fountain, there are a few other things that should be taken into account. As Nick Allen rightly points out, signs of aquatic excess in America’s playground aren’t entirely what they seem. Heck, Bellagio’s lake is actually kept flowing by a supply of un-drinkable well water located under the marble foundation of the iconic hotel. So, don’t worry: Every time those cannons blast water over 200 feet in the air (to the tune of Sinatra, Elvis, or – strangely – Puccini), boaters and recreationalists on Lake Mead don’t suddenly lose a foot of elevation.

In fact, the entire Strip has done a pretty impressive job of water conservation. Hotels are recycling bathroom water (eew), and reducing the frequency of linen-laundry cycles (also eew). The entire Strip, due to these efforts, only accounts for roughly seven percent of the city’s water consumption; And that is despite the fact that those swanky hotels make up roughly 70 percent of economic activity for the City of Debauchery.

So, yeah: The rate of dissipation, and the projected date of Lake Mead’s “crises” levels are in flux; but there’s probably little doubt that, as Vegas grows, the flooded canyon is going to have a tough time keeping up with growing demand. Between the drought, unpredictable Rocky Mountain snowpack, and the fact that Vegas is kinda in the middle of a dry swath of American real-estate (it’s located in a desert for those of you taking common-core geography), it’s only common sense that the city can't expect to depend perpetually on the body of water behind Hoover Dam.

So, what are the solutions? I mean, shipping a bunch of Fiji bottles to the southern tip of Nevada seems slightly impractical. Well, there is an underground aquifer, roughly 260 miles away, that could help the city supplement its supply of fresh water… Unfortunately, a bunch of environmentalists decided that some obscure species of endangered springsnails might be adversely impacted by attempts to retrieve water from the underground source, so plans have been halted. (Oh God!!! Not the springsnail!)

One landscaper in Vegas, quoted by the Telegraph, suggested outlawing the sale of grass seeds. (Calm down Denver…We’re talking real grass in this case.) Of course, if we outlaw lawns only outlaws will have lawns.

I guess, we could consider the power of supply and demand’s influence on market based prices… But that would probably violate some commandment of liberal ideology. I mean, it would almost seem like market forces already have a remedy for overconsumption. If we actually adhered to basic market economics, as supply dwindles prices would increase; and, eventually, that would likely alter the behavior of consumers. Conservation would be driven, not by government mandates or environmental regulations, but by simple economics. I hate to sound like such an econ-policy wonk, but even in a city where “put it all on red” occasionally sounds like good advice, the rules of free-market principles still hold true.

Of course, it would also be nice to see discussions about water rights return to their appropriate place in public discourse: Namely, it should remain between the parties that control the water, and the parties that want to control the water. As much as I love the endangered springsnail, the major concern over water supplies shouldn’t be hashed out in an environmentalist’s bureaucratic federal office. It should be between cities, the rural entities in charge of the water, and the users (farmers, ranchers, and – gasp! – corporations) who want a slice of that underground aquifer.

Also, and this is really thinking outside of the box, it is possible that these kinds of problems are simply expected when a city decides to set up camp in the middle of a desert. But with a little ingenuity, a little more free-market influence, and some help from Mother Nature, Vegas will probably be just fine…

And let’s hope so. Because, really, nothing kills a good Roulette game like a shortage of ice.