The Soviet Games Continue in Sochi 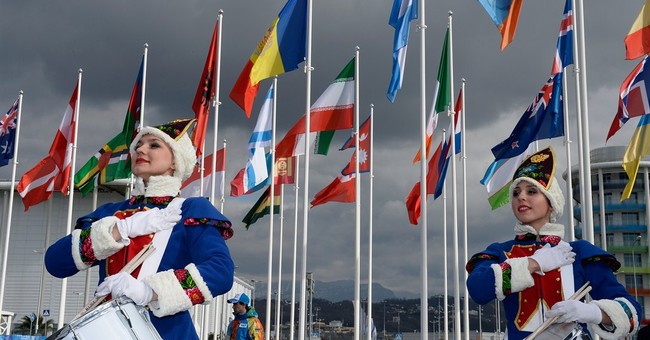 The decedent past of Soviet Russia, it turns out, is not that far behind us. Oh sure, Russians might have Wi-Fi, post-soviet sedans, and Hugo Boss… But it’s not exactly the revolutionized and reformed former communist state we’re supposed to believe. And Sochi, home to this year’s Winter Olympics, is not exactly the Salt Lake City, or the Vancouver, of the Black Sea. As Sochi struggles to make their resort town mildly bearable for visitors, in time for the winter Olympics, the world has been given a glimpse into the lack of progress Mother Russia has made since the fall of the “evil Empire”.

To an extent, the Soviet Union is apparently alive and well. At least in practice. With the eyes of the world on Sochi, it is becoming apparent that the façade of progress has changed little since the days of soviet propaganda efforts during the Cold War. The same tactics of deception and public-relation puffery plague the corruption-clad Kremlin. As reporters poured into the resort community for coverage of the year’s biggest sporting event, the blatant incompetence of good-old-fashioned Russian grandstanding was prevalent. (Heck, even New Jersey would have been a better location judging by the tweets from American reporters… And that analysis is coming from a guy in Colorado.)

In fact, the images and initial reaction to Sochi’s “preparedness” (seriously... it's worse than you think) for the winter games begs the question: How is Russia still considered a Super Power? (Well… I guess nuclear weapons do go a long way.) So far, the images and stories that have been reported would seem to be originating from a third world dictatorship. Given the horror stories thus far, it seems more like North Korea was hosting a national press conference than a developed nation preparing for the World’s Games. Water has been declared unsafe for contact (I don’t want to know what happens when you drink it), plumbing is non-existent in some locations, and even basic infrastructure needs have been largely neglected. The problems plaguing reporters would be comical if they weren’t so depressing.

The biggest problem seems to have been a quality that Russia carried over from the era of Soviet rule: Corruption, and good-old-fashioned government incompetence. And while corruption is not exclusive to former communist states (or for that matter, currently communist states), it is largely exclusive to big government and statism. After all, it’s pretty difficult for big business to climb into bed with politicians when they have little power or influence over the nation they govern. Next to black market weaponry and top shelf vodka, corruption seems to be among Russia’s most plentiful commodity.

The Soviet Union – like North Korea, Cuba, and even China today – was notorious for its grandstanding and propagandistic efforts to portray itself as cutting edge. Of course the image of Gorbachev using a dial phone was hilarious to a nation that just discovered the potential of fax machines. And today, the image of Sochi hotel rooms missing light bulbs, doorknobs, and clean water incites a similar response from the West. More than two decades after the collapse of the world’s largest communist government, it’s tradition of centralized power and malicious governance continues with devastatingly incompetent results.

When the Bolsheviks first implemented their revolution in 1917, they portrayed themselves as the savior of the “everyman”. They were dedicated to “freeing the workers” from the slavery of business. And they even promised a life of affluence through communal involvement and paternalistic centralization.

But the truth is, the Bolsheviks were like Guy Fawkes… They only wanted a different brand of elitism and authoritarianism. (Guy Fawkes, by the way, wanted to blow up Parliament as the first step in implementing a Catholic dictatorship upon the good subjects of King James I. Not exactly the V For Vendetta freedom fighter that vagrant vigilantes envision when they veraciously invoke his visage.) The brand of government that emerged from the ashes of communism’s failure had similar intentions. Given Putin’s crackdown on political opponents, and his penchant for rewarding the politically connected, the resurgence of a grandiose communist-era-Kremlin seems to be more important than competent governance.

The abject failure of Sochi to ready itself for the 2014 Olympic Games (despite a $50 billion spending spree) only offers the world a glimpse into the stagnation of Russian evolution since the early 1990’s. Contracts were handed out to firms with personal ties to Putin (almost $7 billion to Arkady Rotenberg, a childhood friend of Putin) and the politically connected. Why? Because big government begets big corruption.

In fact, the abysmal (and quite frankly embarrassing) display in Russia is merely the end result of leftism, and collectivism. More to the point, this is the failing of central planning and governmental monopoly. While the Soviet Union might have died decades ago, the impression that 70 years of communism wrought upon the Russian people has yet to be undone. KGB strongman, Vladimir Putin, is a throwback to the power hungry statists of Soviet politics – and it shows.

While Moscow, and a few key cities, have managed to produce great wealth (ironically through their pursuit of capitalistic commerce) much of Russia continues to lag behind. Mother Russia, to the generations that grew up in a post-Stalin world, will always be viewed as a paternalistic government. And when governments fails to achieve on their nannyistic promises, third-rate PR gimmicks (like doorknobs glued onto hotel doors) are all that are left. There may be no more Iron Curtain, but we are still peering into the world that it left behind.

The games will still be fun to watch, despite the glimpse into Russia’s traditionally despotic form of cronyism. But I’m glad I’m doing so from the comfort of my living room in America, and not in the communist-era-relic of Sochi. Maybe Vladimir Putin should have asked for Republican Mitt Romney’s help in saving Sochi before the Games began… It would probably have cost much less, and local hotels might actually have little things like running water, light bulbs, and lobbies.