Michael Reagan
|
Posted: Feb 06, 2021 12:01 AM
Share   Tweet
The opinions expressed by columnists are their own and do not necessarily represent the views of Townhall.com. 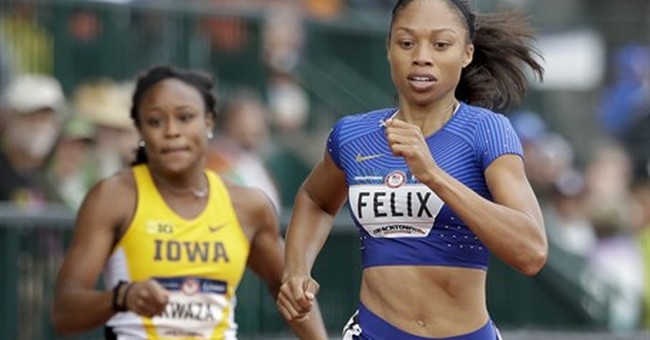 And, on top of all that, President Biden’s executive order allowing transgender males to compete against girls is going to destroy girls sports in America.

Almost every one of Biden’s many executive orders to date is going to be harmful in some way to our security, our battered economy, or both.

Closing the Keystone Pipeline, stopping construction of the border wall and raising the federal minimum wage to $15 an hour are a few of his terrible mistakes that come to mind.

But the worst order Biden signed was the one saying biological males who have transitioned to females should be allowed to play on high school and college girls sports teams.

It was a dumb, divisive and arrogant order for a unity president to make.

We know presidents resort to using executive orders when they can’t get the stuff they want through Congress. To paraphrase President Biden, they get to play dictator - which he did.

Republicans in Congress have barely made a peep about Biden’s terrible executive order, but do you know who the most conspicuously absent critics of this transgender madness are?

Where are the fathers who are willing to stand up and fight for their daughters to be able to compete in school sports with other girls?

But unless millions of fathers - and mothers - unite in their anger, in five years there’s liable to be no female sports at all in our public high schools or colleges.

What sane young girl is going to want to get deeply involved in a sport like swimming when she sees that transgender women are unfairly dominating it?

There can’t be 5 percent of the American population who honestly thinks it is fair for a law that allows biological boys to be able to compete against girls in sports like basketball, track, soccer, swimming, golf and tennis.

Everyone knows boys have more muscle mass and a larger bone structure than girls.

And even when boys take drugs to reduce their testosterone levels and wait a year before they begin competing as a transgender girl, they still have physical advantages that even the strongest, best-trained girls can never overcome.

But of course these inconvenient biological realities don’t mean a thing to the liberal media pundits, feminists, the ACLU and so-called progressive politicians in Washington.

They applauded Biden’s transgender executive order like a North Korean stadium card section because they agree that it is “fair” or because they’re afraid of being attacked or shamed on Twitter.

For some reason, “progressives” see no problem, no inequity, no glaring stupidity in asking girls to run the 100-meter dash or play soccer against transgender women with the physical assets of someone like, say, Caitlyn Jenner.

Bruce Jenner was an Olympic gold-medal winner as a man and is now Caitlyn, the world’s most famous transgender woman.

She’s 6-5, weighs about 250, wears Size 13 shoes and at 71 can still drive a golf ball farther than most of the people running the House or Senate can walk.

Do you think a teen-age version of someone like Caitlyn might be the dominant player at your state girls high school track tournament?

The transgender insanity Biden wants to impose on the entire country is already a reality in Connecticut, where a few years ago two transgender athletes racked up 15 women's state championship titles - and deprived a lot of girls of any chance to win their titles and earn scholarships to college.

Connecticut’s transgender policy is still in the courts. But maybe, if we’re lucky, the U.S. Supreme Court will eventually bring common sense back to the upside-down world of boys and girls sports.

Otherwise, we might have to start holding Transgender Olympics or form a Transgender Professional Golf Association.