The Democrats Run on Hate

Michael Reagan
|
Posted: Oct 27, 2018 12:01 AM
Share   Tweet
The opinions expressed by columnists are their own and do not necessarily represent the views of Townhall.com. 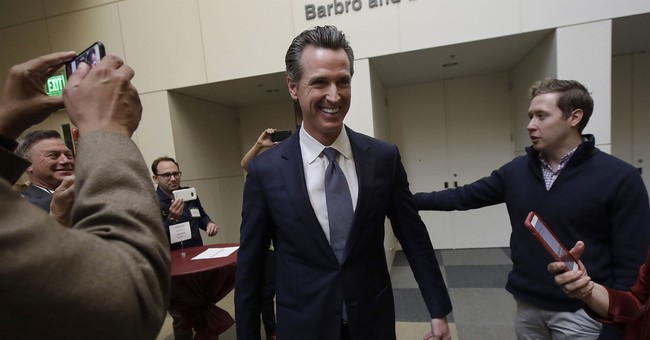 Guess which future leader of the United States said this about illegal immigrants in 2006:

"We are a generous and welcoming people, but those who enter our country illegally, and those who employ them, disrespect the rule of law.

"And because we live in an age where terrorists are challenging our borders we simply cannot allow people to pour into the U.S. undetected, undocumented and unchecked.

Remember the good old days of about a decade ago, when Democrats were in favor of strong borders and the strict enforcement of immigration laws?

Until Trump was elected, the Obamas, Clintons and Schumers of the land gave tough-sounding speeches on illegal immigrants and argued in favor of strong borders.

But Democrats have been against Donald Trump's famous border wall since Day One.

They insist over and over today that they are in favor of humane immigration reform, not open borders.

Yet look what happens when a "caravan" of as many as 14,000 men, women and children from Central America marches toward the United States with the intention of invading us.

The Democrats' solution is to warmly welcome the immigrant invaders into our country, give them plenty of free government help, let them go free while they process their asylum claims for a year or two - and encourage them to register as Democrats as soon as possible.

Meanwhile, Democrats and the liberal media are quick to call Trump uncompassionate and a racist for wanting to use the U.S. military to prevent a mob of poor illegal immigrants from crashing our border.

CNN, NBC, the New York Times and their ilk won't put Nancy Pelosi, Chuck Schumer or Hillary Clinton on the spot by asking them point-blank how they'd handle the "caravan."

But if they asked me, I have an idea they wouldn't like too much.

Our military should meet the economic "refugees" at the border, give them all the arms and ammo they want and bus them back to their home countries where they can overthrow their bad governments and gain their human freedoms.

The Democrats' generous open-door policy toward illegal immigrants has already cost California taxpayers billions, caused social and economic problems and made it a sanctuary state.

Things are only going to get worse after Nov. 6 when Lt. Gov. Gavin Newsom is expected to be elected governor.

Newsom, the former mayor of San Francisco whose policies turned that city into a homeless campground, thinks it's just great that 14,000 economic "refugees" from Central America are marching toward Texas.

Like Democrats across the country, Newsom has no issue to run on except hatred of Donald Trump.

A victory for him over Republican John Cox will speed up California's death spiral and prove how incredibly stupid my state's electorate is.

Democrats have nothing positive to offer America, either.

Their only hope is that voters hate Donald Trump so much they'll give Democrats control of the House of Representatives so they'll be able to impeach President Trump and block his policies.

It's a shame they are so blinded by their hatred of the president that they are willing to throw away GDP growth of 4.2 percent, historic low unemployment and lower taxes in exchange for what - a borderless country and Bernie Sanders-style socialism?

The Democrats' hatred reminds me of the time someone asked Israel's Golda Meier when she thought there would be peace in the Middle East.

She said it would only happen when Palestinians start loving their children more than they hate the Jews.

Our political civil war will end only when the Democrats start loving their country more than they hate Donald Trump.