Michael Reagan
|
Posted: Sep 01, 2018 12:01 AM
Share   Tweet
The opinions expressed by columnists are their own and do not necessarily represent the views of Townhall.com. 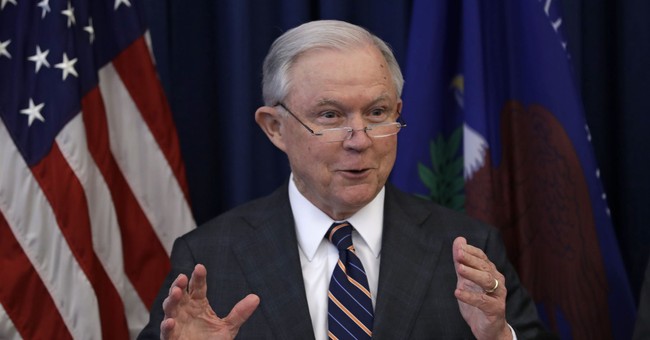 Along with his many other daily Tweet targets, President Trump can't stop beating up on Jeff Sessions for being a lousy attorney general.

When it comes to Sessions, the president leaves no petty pebble un-thrown.

This week, Trump supposedly was heard telling his aides that he didn't like Sessions' Alabama accent or the fact that he didn't go to an Ivy League school like the president did.

Trump isn't the only Republican who's unhappy with Sessions, who obviously should have told the president before he was hired that he was planning to recuse himself from the Russian collusion investigation.

Trump supporters and the conservative media have been clamoring for the president to force Sessions to resign since day one.

They want the president to hire a new attorney general who'll rein in special counselor Robert Mueller or, better yet, they say, fire him.

They want someone who'll also name a special counsel to aggressively prosecute Hillary Clinton for destroying her emails, or to fully investigate the political corruption we've learned thrived at the top of the Obama administration's FBI and intelligence agencies.

Any other cabinet member who had been criticized and demeaned so many times in public by his president would have cleared out his desk and left a year ago.

So why hasn't Sessions resigned?

I think it's because he is a lot smarter than people - and maybe even the president - think he is.

I think he knows that by staying at his attorney general's job, he is actually helping President Trump politically.

Sessions, who as a senator was one of Trump's earliest and most vocal supporters, knows that as soon as he's gone his boss will appoint a new attorney general whose litmus test would be to promise to fire Robert Mueller ASAP.

Whether Mueller deserves to be fired is not the issue.

Neither is the fact that President Trump and his campaign did not collude with Russia to steal the 2016 election from Hillary Clinton or hack the Democrat National Committee's computers.

But the second Sessions is canned or resigns, the president will be accused of obstructing justice by everyone on the planet except Vladimir Putin.

Democrats, Republicans and the mainstream media will be united against him.

It wouldn't matter how innocent President Trump is of colluding. It would look like he was trying to obstruct justice.

He'd be severely hurt politically - as would the Republican Party in the midterm elections this fall.

Jeff Sessions has to know all of this.

I think he knows that by not resigning until the Mueller investigation is over he's protecting the president from himself and from doing major political harm to the GOP.

Despite suffering 18 months of verbal abuse from his tough boss, Sessions just could still be one of President Trump's best friends.