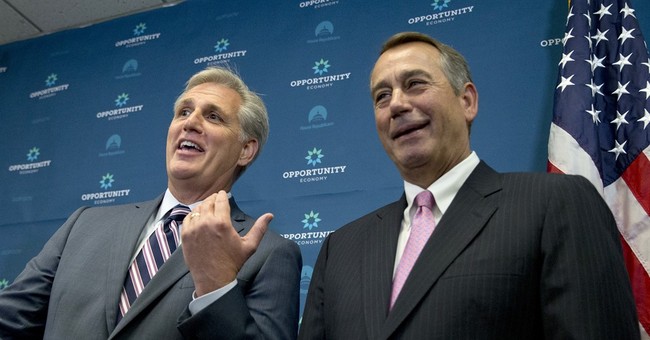 Some Republicans in Congress will never learn.

This time the GOP's hard-right conservative minority had dreams of shutting Washington down over Planned Parenthood's illegal profiteering in fetal tissue from its abortion business.

They hoped to defund Planned Parenthood of its half-billion in annual federal dollars by attaching a measure that did exactly that to a larger spending bill.

They thought their legislative trickery would force President Obama into vetoing the spending bill, thereby shutting down the government in Washington.

Obama would then get the blame for the shut down and - what? - not get reelected in 2016?

Come on. The super-conservatives were never going to get enough votes in Congress to catch Obama in their trap.

Luckily, they were saved from seriously hurting themselves, their party and the conservative cause on Wednesday, when the Senate and the House each voted for a stopgap spending bill that keeps D.C. operating until Dec. 11.

But the televised hearing on Tuesday, where Republicans grilled Planned Parenthood boss Cecile Richards, was a PR disaster for the GOP.

Committee chairman Jason Chaffetz and his allies scored some points during their five-hour interrogation.

They got Richards to admit she earned $600,000 a year and exposed that Planned Parenthood had transferred millions of dollars from its charitable arm to its lobbying and political operations.

Planned Parenthood's claim that only 3 percent of its services are for abortions was also shown to be a lie. About a tenth of its clients get an abortion and abortions account for about a third of its annual revenue.

Those Republican highlights were featured later on Fox News and talk radio and gave their conservative audiences something to gloat about for 24 hours.

But they were not what most of the country saw or heard.

When the mainstream media covered the Planned Parenthood hearings, what they focused on was a nice woman being badgered and rudely interrupted by a gang of nasty Republicans.

No matter how evasive Richards was, no matter how she tried to downplay or spin Planned Parenthood's gruesome and immoral abortion business, she was always going to receive nothing but sympathy from the mainstream media.

And where do most American voters - and most independents -- get their news? From CBS, CNN, the Washington Post and dozens of other liberal media outlets.

If any Republican thinks that their side of the Planned Parenthood argument will ever get a friendly or even fair presentation on those places, they are smoking crack.

In the Age of Obama and bigger government, the idea of shutting down the D.C. government over a matter of principle is thrilling to any true conservative.

But if Republicans want to defund Planned Parenthood right now, the best way to do it is through the states.

There are 31 states with Republican governors. Five of them have already defunded Planned Parenthood by prohibiting the use of Medicaid funds for abortion.

Putting pressure on the states to remove taxpayer support of abortion mills can work and it can be done without sabotaging the Republicans' presidential chances next year.

Meanwhile, the super-conservatives in Congress need to get smart and get real.

If every conservative and every Republican in the country votes for the GOP's nominee for president, we still lose.

We need independents and Democrats in 2016. Lots of them.

And for most of those voters, especially the younger ones in their 30s and 40s, Planned Parenthood is simply not a presidential issue.

Jobs and the economy are.

Republicans of all kinds from moderates to super-conservative need to keep their eyes on the GOP's most important prize - winning the White House.

To do that, we have to broaden our message and our appeal, not narrow it.