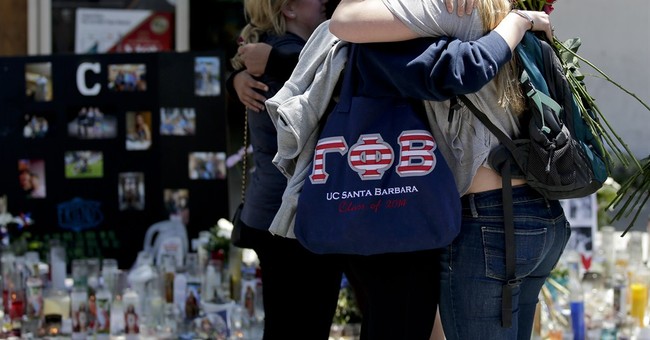 You all know who he is.

But I'm not going to repeat the name of the 22-year-old crazy person who stabbed or shot six young people to death near the UC Santa Barbara campus last week.

I'm not going to quote from his insane 137-page "manifesto," either.

It just spews his pathetic reasons for why he planned his murderous retribution against all the girls who had paid him no attention during his short and awful lifetime.

You know about his pampered but mentally troubled and lonely life - growing up amid the movie glamour of planet Hollywood, seeing a therapist since age 8, a virgin at 22 who'd never even been kissed by a girl, etc., etc., ad nauseam.

But how could you not know every detail of his miserable bio by now?

As per usual following a mass killing, the news media reacted in the usual knee-jerk fashion, focusing on the killer's life story and guaranteeing that he'd achieve his desired 15 minutes of underserved fame.

Experts who study mass murder know that future crazies - and they are out there -- will take note of the attention mass murderers get from the irresponsible media and will be encouraged to go on their own killing sprees.

A friend of one of the victims had it right when he complained to the Los Angeles Times that it made him "sick seeing those videos over and over again. By continuously showing the videos and stuff, you're putting the limelight on him and not the people he killed.... I want to remember Chris."

The mass murder in the beach community of Isla Vista also instigated the usual knee-jerk reaction from the anti-gun lobby.

Some anti-gun politicians in Sacramento reacted to the shootings by proposing new laws to make it harder for potentially violent individuals to buy or own guns.

But there's already a law in California designed to prevent mentally ill people from obtaining weapons. It's an involuntary psychiatric detention called a "5150."

That existing law didn't prevent the horrible events in Isla Vista from happening. No new law could have thwarted the crazy killer, either.

His mother knew he was a danger to himself and others and asked the local cops to pay him a visit. The police did go to the kid's apartment, but saw no reason to lock him up.

This latest tragedy - and the knee-jerk reactions to it -- was a lot like the previous mass shooting tragedies. But this time the crazy social misfit's weapons of choice didn't fit the standard profile.

He shot three young people to death with guns, which he bought legally. But he butchered his first three victims with a knife and also tried to kill several people by deliberately running them over with his BMW.

Using a knife to kill three people apparently made no impression on some of the knee-jerkers in the California Assembly because they didn't immediately propose a new law outlawing Ginsu knives.

For them and the liberal media, it's all about guns.

But no matter what we do to toughen gun laws, upgrade our mental health services or increase the number of citizens with gun-carry permits, we will never prevent every future crazy person from murdering innocent people if that's what he is determined to do.

As I've written in this column before, in a country of 315 million people and nearly as many guns, "crazies happen" -- and there's nothing we can do to stop them.