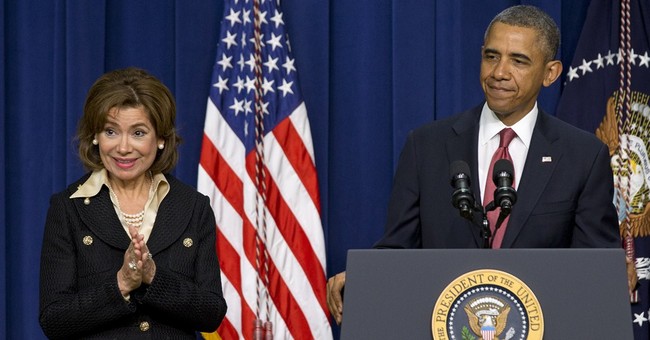 Let me get this straight.

For five years Barack Obama has been president.

For five years he’s demonstrated -- with amazing consistency -- that he has no clue what we need to get out of the ditch and back on the road to real economic recovery.

He’s repeatedly demonstrated that he can’t work with a divided Congress and he can’t, or just plain won’t, lean on Harry Reid to allow the Senate to vote on the stack of jobs bills that has been sent over by the House.

The president clearly has learned nothing on the job. And now our multi-clueless commander in chief is so frustrated that he’s not getting his way with Congress, he’s starting to issue decrees like some tin-pot socialist South American dictator.

That’s what Obama did this week when he called on Congress to pass his latest list of tried-and-not-true ideas for resurrecting the economy.

If Congress didn’t enact his pet policies -- a federal minimum wage hike, another unemployment insurance extension, funding for universal preschool, etc. -- the president decreed, he was going to wield his executive super-powers.

“I’ve got a pen and I’ve got a phone,” he bragged, “I can use that pen to sign executive orders and take executive action and administrative actions that move the ball forward.”

Trouble is, the president is one of the few guys on the field who doesn’t realize that the ball he wants to move forward has been out of air for almost a century.

The most powerful leader on the planet still doesn’t get it when it comes to economic policy -- and obviously never will.

He still thinks like a naïve 20-something community organizer from South Chicago who has never had to meet a payroll or raise a dime of capital.

He still believes in the 1930s New Deal myth that it’s the government that creates prosperity and growth, not free-market capitalism.

And he still doesn’t understand that it is lower tax rates, federal spending cuts and less government regulation that encourage businesses to expand, create jobs and hire people.

In Obama-Think, passing a law to jack up the minimum wage, extending unemployment insurance for six months and throwing billions in subsidies at shaky solar companies are considered magical ways to stimulate a sluggish economy and create jobs.

In the real world, as we’ve seen for the last five years, it works the opposite way.

When one political party passes laws making it more costly for businesses to hire humans, companies learn to streamline and get by with fewer humans or hire humans in foreign lands. Can you spell Obamacare?

When jobs become too costly, they get destroyed and they never come back -- by the millions. Can you count a record 92 million people not participating in the workforce?

The only way our slow boat to permanent economic stagnation is going to be turned around is if we return to the economic policies of the 1980s and 1990s.

That’s when a pair of economically savvy presidents named Reagan and Clinton made sure tax and regulatory policies did not cripple the ability of capitalism to create economic growth, prosperity and jobs.

It doesn’t matter how many lightly taxed and lightly regulated “Promise Zones” President Obama sets up in North Carolina or Texas with a wave of his mighty pen.

The whole country needs to be turned into a permanent “Promise Zone.” But that’s never going to happen as long as we have someone in the White House who doesn’t appreciate or like the free market and doesn’t know the difference between capitalism and cronyism.