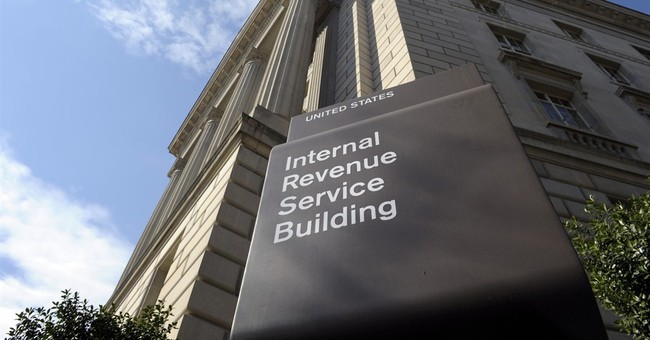 Jay Leno told his studio audience the other night that President Obama should forget his plans to close the detention camp at Guantanamo Bay and instead close the IRS.

The applause was instantaneous and the laughs were loud and genuine.

Most ordinary Americans would have whooped and hollered in favor of Leno's idea long before they learned the IRS has been caught targeting conservative political groups and wasting millions on moronic employee-training conferences.

But the IRS is no joking matter.

The average working American -- poor or rich or in-between -- hates and fears the IRS for good reason.

Able to seize your bank account or house without a court order, able to shut down your business overnight, the IRS is the closest thing to the Gestapo America has ever had.

But it's not the current IRS scandals that are the real problem. It's not the hated tax-collecting bureaucracy itself. It's not even whether the Obama regime used the dangerous powers of the IRS as a political weapon.

The real problem -- the long-term problem and the one Republicans have to find the courage to fix -- is the horrible income tax system the IRS is hired to enforce.

The federal income tax code deserves the death penalty for a lot good reasons. It's unfair, overly complex, horribly politicized, harmful to individuals and the economy, helpful to the forces of Big Government and impossible to understand without a CPA.

It's also a costly waste of money and time. Just complying with our unnecessarily (but deliberately) complicated federal tax system costs Americans about $430 billion a year, according to economist Arthur Laffer.

The IRS scandals are a golden opportunity for conservatives and Republicans to direct the country's attention toward the ultimate and long-overdue goal -- abolishing the IRS as we know it and drastically reforming our tax code.

We need a strong leader -- now -- who will stand up and lead the country down the road to radical tax reform.

Maybe it's going to be Sen. Ted Cruz of Texas. Earlier this week he called for abolishing the IRS after instituting a simple flat tax that could be filled out on a postcard. Maybe it'll be another rookie in Washington, Sen. Rand Paul of Kentucky.

The biggest problem we have is that our side -- the tax-reform side -- has no leader and no clear, unified message.

Should we conservatives go for a Flat Tax or a Fair Tax?

A low, simple, flat-tax percentage for all income earners, minus deductions for home mortgages and charitable deductions? Or a national sales tax of about 23 percent that would replace both the federal income tax and the payroll tax?

If my father Ronald Reagan were around today, I know what he'd do.

He'd do exactly what I'd do -- get the flat-taxers and the fair-taxers together in a room and have them hash out a single tax reform program to sell to the American people.

So, sure, let's bring the Obama Gang and its IRS lackeys to justice for their abuses.

But what we need most right now is for someone -- Ted Cruz, Rand Paul, Donald Trump, even Jay Leno -- to convene a national tax convention that would unite our side and lead the fight for a better tax code.

Republicans can't afford to be split on the important issue of income tax reform or miss this chance to focus on the crimes of the IRS.

The Flat Tax and the Fair Tax each have pluses and minuses that need to be debated. But in the end it really doesn't matter which idea triumphs.

America and all Americans would be better off with either one. Either would eliminate the progressive tax system and make federal taxes simpler, fairer, smarter and apolitical. And, best of all, either one would kill the IRS as we know it -- forever.