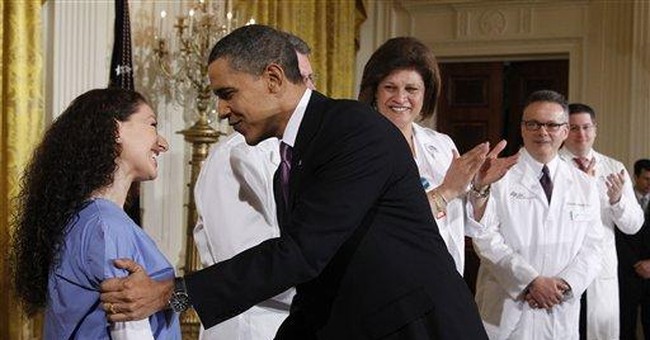 Well, the not-so-surprising news of the week out of Washington is that President Obama is now calling on Congress to schedule a straight vote on the Democrats' health care reform measure.

The new twist is that Democrats now recognize that their flawed plan, which has been met with stiff resistance from congressional Republicans and the American people, can only be passed on a pure party-line vote. So after a one-day, photo-op summit, President Obama has decided the time for negotiation has passed.

Now, to the majority of Americans who make their living outside of Washington, this idea of having a straight "up and down vote" sounds straightforward, but in reality it means that Congress will use the controversial "reconciliation" procedure to pass the Senate bill through the House for the Senate to "fix" later, ignoring the wide differences between the two bills which have currently passed. In short, it's a loophole, and it's all the president has left.

Today, an amazingly low percentage of Americans actually support passage of these reforms. The RealClearPolitics health care poll average shows a full 50.3 percent of Americans against it, with just 40.8 percent in favor. A Quinnipiac poll says a mere 35 percent endorse the plan.

These numbers would make a reasonable person think that the administration would not want to ram-through a bill with such great significance to our nation by merely relying on a procedural opening. But it again appears that Democrats think they know better than the vast majority of American people. What's new?

And what will most assuredly haunt the president over the course of this year and leading into the 2012 election is the fact that this effort is in direct contradiction to the president's previous campaign promises.

While running for office, Barack Obama repeatedly said that on the "big ticket" issues, such as health care, it was vital that policy be made on a consensus basis with at least a 60 percent majority rather than settling for partisan voting blocks. Having lost his "60 percent" majority of liberal senators, it did not take the president long to change tunes.

Mr. President, do you recall saying back in 2007 that "Maybe you eke out a victory of fifty plus one, but then you can't govern"? Well, I guess you are now admitting what many of us feared all along. You are not prepared to govern!

In President Obama's prepared remarks, he tries to paint himself and members of his party as heroes who push through this "long and wrenching debate" and don't "give up because the politics are hard."

He's got it half right. That is what the American people want to know. But the president cannot show us he is looking out for our interests and our future by forcing a quick, partisan vote on an issue that will impact not only this time but generations to come. This is especially true since he was so adamant in his opposition to using this very parliamentary measure in governance during his campaign.

And he cannot show us that he is listening when polls show that only 35-40 percent of Americans support this bill.