Time to Revolt Against the Revolution 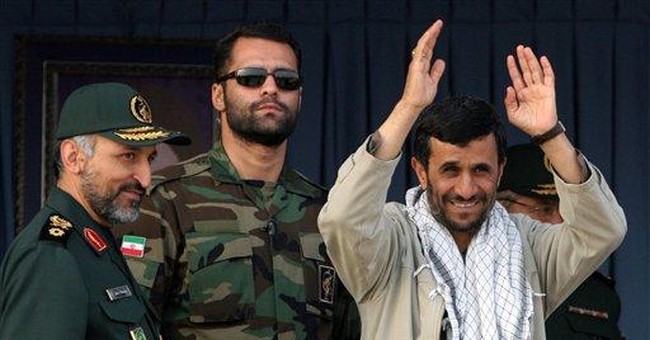 This Thursday, February 11, mark the 31st anniversary of the Iranian Islamic Revolution. Iranian leaders, including the state's religious leader Ayatollah Khamenei, have decided to "festively" commemorate this anniversary by vowing to deliver a powerful punch to the West.

Just over 30 years ago, with the support of the then-new Islamic regime, radical Islamic students in Tehran carried the banner of their revolution right up through an attack on the United States embassy compound, where they took 53 Americans hostage. Revolutionary leader Ayatollah Khomeini saw the hostages as more than bargaining chip as he built his new regime -- they were tokens of power and prestige that became increasingly powerful as each painful month of their detainment passed.

The months did drag on until we saw the magical images of the hostages' release after 444 days in confinement, coupled with my father's inspiring inauguration. This marked the start of an era of a bold and innovative America-first approach to foreign policy, when Americans again started to believe that their nation would pursue policies and take actions necessary to protect her people from the dangers of the world, whether in Tehran, Moscow or Tripoli. Sadly, we seem to have lost our way on that front.

It is of great concern that despite a year of allegedly aggressive negotiations with our "allies" in an effort to find a diplomatic solution to Iran's pursuit of nuclear capabilities, the only tangible results appear to have been increasing nuclear progress and arrogance from the caretakers of the old Islamic Revolution.

These bold and boisterous proclamations on the part of Iranian leadership, in open defiance of the West, are undoubtedly an attempt to keep the focus of the international community and even many Iranian eyes off of their simmering internal rebellion. Iranian leadership does not want anyone to look too closely at the prospects of a new wave of protest by Iranians who are seeking more individual liberties and demanding that they have a say in their individual and national future. Iranian leadership particularly wants to keep anyone from looking too closely at the violent rebuttals issued by Iran's military, police and intelligence networks.

The Obama administration and their Democratic enablers in Congress have previously failed to recognize that our strongest allies in the important fight against Iran's nuclear ambitions and international terror efforts are not members of the United Nations Security Council such as Russia and China -- rather it is the unlikely duo of our friends in Israel and the millions of Iranians who have followed opposition leader Mir Hossein Mousavi into the streets. While I am pleased to hear that President Obama is set to announce unilateral sanctions against Iran, and that it now appears Russia is moving closer to support of international sanctions, this is simply not enough.

If he were alive today, my father would likely be mystified by this administration's unwillingness to embrace the millions of people who are seeking freedom in a nation that has the United States and Israel as targets 1 and 1A. Undoubtedly, my father would have recognized that support of Iranians who are peacefully pursuing individual freedoms is not only the right thing to do -- it is also the smart diplomatic play.

By continuing to abide by its ineffective brand of diplomacy, this administration is setting us up for a risk much greater than the trouble of undertaking unilateral sanctions or using other forceful means to resolve the burgeoning conflict. It is time for our nation to send a strong, powerful message of support to freedom-loving Iranians. It is also time to send a message to Iran's revolutionary leadership that the days of appeasement are behind us.

Today, Americans once again find themselves asking whether the United States and her allies are going to continue on a foreign policy course that encourages dangerous behavior by Iranian radicals while turning a blind eye toward freedom-loving Iranians, or instead takes a stronger, bolder approach that forces these dangerous elements to put an end to their pursuit of nuclear capabilities.

I for one support a policy that severely weakens Iran's leadership to the point where they can easily find themselves on the wrong side of a new Iranian Revolution. And should our friends, the Israelis, decide to take military action on their own in an effort to protect the security of their homeland, our nation should unequivocally support them.

How is that for a powerful punch, Ayatollah?