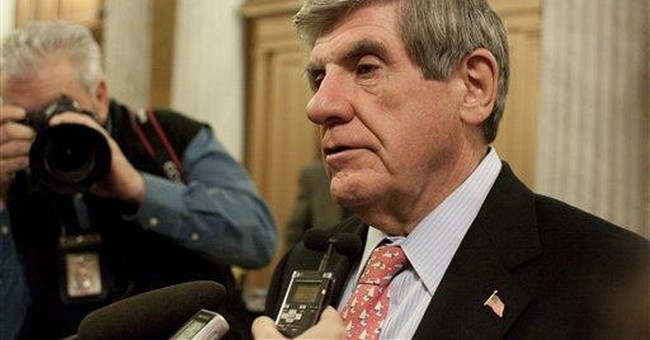 As families across our nation prepare to celebrate Christmas together, Democrats in the United States Senate and their ringleader, Harry Reid, have been deviously busy once again. They're working hard to fill taxpayers' stockings with large lumps of coal in the form of health care reform legislation that will likely decrease the quality of care for Americans, create a flurry of new taxes, and exponentially increase America's deficit. How is that for holiday cheer?

While Sen. Ben Nelson (D) of Nebraska appeared to be holding out as the Democrats' 60th vote because of his moral concerns over taxpayer-funded abortions, he suddenly "found the light" when offered an additional $100 million in assistance for Nebraska's state Medicaid program.

This new provision, negotiated by Harry Reid and Sen. Nelson, will make Nebraska one of only three states to have their Medicaid expansion fully funded, leaving the rest of the country to pick up the tab. This compromising carrot is made all the more disturbing by the cost to the American taxpayer -- the Congressional Budget Office (CBO) released new information on Sunday saying that this amendment alone will end up costing $1.2 billion over 10 years, hardly chump change.

And in a less obvious bribe, Sen. Nelson also cut a deal to get tax and free breaks for Nebraska's insurance companies. (Not surprisingly, the Center for Responsible Politics reports that Nelson has been given nearly $650,000 from insurance companies over the past five years -- more than any other industry has contributed.) These negotiated breaks are significant, saving companies like Blue Cross/Blue Shield up to $20 million. In other words, even as more tax money will be flowing into Nebraska, considerably less will be flowing out. For all the other states, a bad bill just got that much worse.

But as I wrote just a few weeks ago, a cause for concern in this debate is not only the "what" of the actual legislation itself: it is the "how" we got here. When this debate headed to the Senate after the left wing-led House pushed through its own version of reform, Harry Reid faced an uphill battle in finding the necessary 60 votes. But rather than relying on the actual merits of the legislation, if any such merits actually exist, the Senate's fearless leader opened the troughs for a pork feeding frenzy.recognizing that his only chance at passage required buying off key Senators.

Now, I am not naïve in this criticism, fully recognizing that when placed in a similar position of power, Republicans in Congress have been guilty of similar activities. Today in Washington, it seems that bribery by tax dollar has become the norm when it comes to moving bills along. But for us taxpayers, that is simply not acceptable.

Senators Reid, Nelson, Landrieu and other Democrats are simply trading their votes, trading their principles, so they can create a cycle of political gain rather than demanding good legislation. Their despicable behavior is meant to secure national "victories" for Democrats while also trying to pacify the growing chorus of opposition to the latest offered health care reform proposal within their own state by masking it with pork, plain and simple.

Today, a lobbyist can face criminal charges for taking an elected representative to lunch or offering small gifts in exchange for votes or attention. President Obama has frequently boasted about his "ground-breaking" efforts to crack down on these types of negotiations. In the Senate, however, it is openly acceptable for intra-congress bribery costing billions of dollars in our tax dollars to take place. Landrieu and Nelson have both gloated over their respective high price tags.

Where's the honor here? The transparency, good governance, and integrity we were promised? Senate Democrats and President Obama should be ashamed they that have let petty bribes and penny-pinching politics triumph over sense and judgment. How's that for the true meaning of Christmas?