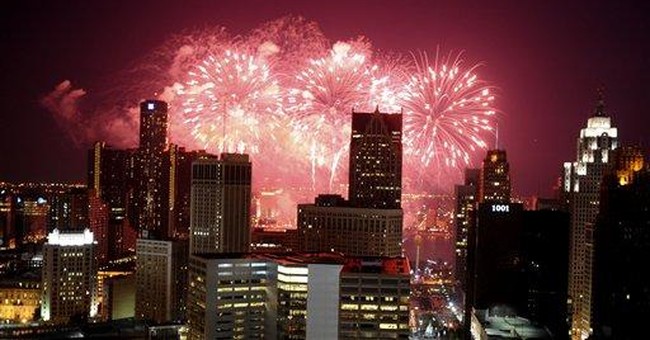 As families across the nation get set to celebrate our nation's independence, it is important to take a moment to reflect on the bravery of the men and women who defiantly stood up to the English Empire and fought for the right to live in a free, democratic and sovereign nation. Whether reflecting on one of the 56 signers of the Declaration of Independence, a nurse tending to wounded Americans soldiers, a gunpowder manufacturer or a private fighting against the vaunted English Army, it was their collective effort that paved the way for our framers to develop a unique system of government that was based on representation rather than repression. Over the last 233 years since the beginning of our remarkable revolution, the United States of America has prospered and developed into a nation that serves as an inspiring example of freedom, standing in stark contrast to the many countries governed by socialistic, totalitarian and authoritarian rule.

However, this year we must mark this Independence Day with a keen understanding of the current internal political battles that lay ahead, those battles that threaten the important divide between government and citizens. President Obama and Speaker Pelosi have an ambitious agenda that, if implemented, would make Americans more dependent on their government than ever before -- certainly more than our Founding Fathers would have envisioned. From socialized medicine, ownership of car companies and large monetary infusions into failing private sector entities to federal control of our nation's energy and education sectors, the U.S. government is rapidly become increasingly powerful and increasingly intrusive.

In a recent address to non-profit organizations, President Obama stated, "People don't need somebody out in Washington to tell them how to solve their problems, especially when the best solutions are often right there in their own neighborhoods, just waiting to be discovered." Don't let this conservative-sounding talking point fool you. President Obama and his Democratic allies are in a race to pass these measures, and more, before Americans have time to look up from their ever-diminishing 401k statements to take notice. The most recent example of this aggressive push is the House's narrow passage of an energy package that includes the infamous "cap and trade" -- a measure that, if implemented, not only puts more control of our nation's producers in the hands of government, but will also result in the loss of American jobs and businesses.

Now more than ever, it is time for each of us fortunate enough to be born into freedom to pay tribute to the men and women who made us a free nation -- choosing the hard and difficult road - by choosing to once again fight for our independence. This time it is an independence from an over-intrusive and ever-encroaching federal government. Today, as it was in colonial times, it will take more than our public leaders to keep America moving forward on the right path. Rather, it will again take the nurse, the private, and the steel worker -- you and me -- to join in the revolutionary charge.