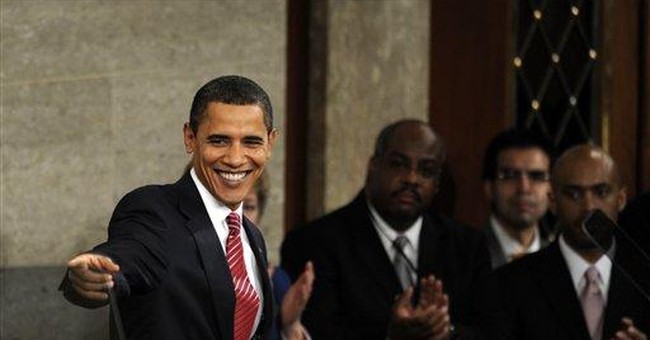 The swooning media were enraptured by President Obama's soaring rhetoric in last night's address to Congress despite the speech's total lack of substance. They never bothered to ask "Where's the beef?" in all those oratorical flourishes.

In this case the beef is the money it will take to pay for his grandiose plans and programs, and that money is allegedly lining the pockets of those who dare to earn $250,000 or more a year.

No matter that if you took every last cent of their earnings you would still not have enough to begin to pay for the ultra-exorbitant spending agenda he laid out in his speech. The bill for that extravagance will be paid by our children and grandchildren.

As he described it, only those in the $250,000 and above bracket will see their taxes increased. They will pay for such programs as government-run universal health care and education. The other 95 percent of the people, many of whom don't pay a penny in taxes, will get checks in the mail -- rebates for taxes they don't pay.

What this means is that the top 2 percent will nearly carry the full load while the bottom 95 percent will live nearly tax free, thus guaranteeing Obama their undying support and their votes.

He is trying to maneuver that 95 percent into supporting taxing the top two percent to pay for everything they'll get.

Obama is deliberately attempting to create an economic system where more people live off the government than by their own efforts, thus creating a permanent underclass utterly dependent upon the largesse of the government and therefore ever-beholden to it.

This gigantic voting bloc can be depended upon to march obediently to the polls and vote to place the full financial burden on the top 2 percent of American wage earners.

During George Bush's administration the president allowed the war to get in his way of vetoing anything coming out of Congress no matter what it cost.

That makes it difficult for the GOP to claim they are the nation's guardians of financial responsibility even when faced with an outrageous bill in the House with a price tag of $400 billion that is loaded with 9000 earmarks. That's 3000 more earmarks than were in the spending bill that got George Bush in trouble.

Yet President Obama, who claims to be a dedicated foe of earmarks, says he'll sign that pork-laden bill because he wants the support of Congress for all the burdens he wants to put on the backs of the top 2 percent of Americans.

In his speech the President laid the blame for the budget deficit on the past administration, blithely ignoring the fact that it was his party that controlled the Congress that rolled up that deficit since winning control of Capitol Hill in 2006. They were running the show that produced that deficit and that's where the blame lies.

From now on, the blame for huge unfunded deficits, borrowing from future generations -- Sen. John McCain calls it "generational theft" -- and the economy-deadening taxation of the productive sector will lie squarely on the shoulders of Barack Obama.