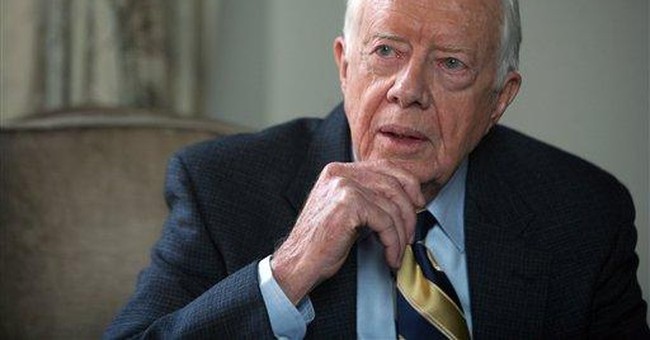 How worthless is Jimmy Carter?

Haley Barbour, Governor of Mississippi, makes the point that when an opposition party seizes control of the White House from its rival, that party almost always holds the Presidency for two terms at least. This means that the odds heavily favor Barack Obama’s reelection in 2012.

Only once in 112 years – since the distant days of William McKinley – did a new president turn out to be so feckless, so incompetent, so sanctimonious, so repellant, so self-destructive, so….well, worthless….that his party lost the White House (big time!) after only one term.

Now, can we guess who this appalling loser might be?

In the sweep of recent history, James Earl Carter, Jr., stands utterly alone in leading his party to capture the White House with overwhelming Congressional majorities (61 Senators, 292 members of the House – far bigger margins than Obama!) and then, after a brief four year demonstration of almost unimaginable ineptitude, handing the reins of government back to the opposition.

In looking ahead to the Obama administration, no one wants an economic or foreign policy repetition of the nightmarish Carter years – the Republic can hardly afford that sort of long-term damage.

But GOP loyalists should legitimately hope that the new president does manage to follow Little Jimmy’s political example – repeating the Carteresque feat of losing the presidency for his party after a single term of office.

In this regard, President Obama’s first week has already provided a promising start—displaying some of the nastiness, small-mindedness, insecurity, and self-righteousness that notably characterized the Georgia Peanut. The Inaugural Address included graceless digs at President Bush that undermined the promised theme of “unity,” while touchy, grumpy comments to the White House press corps stunned reporters who had previously displayed their infatuation with the new president. The odd remarks scolding Republicans with a reminder that “I won” and warning them not to listen to Rush Limbaugh, hardly characterize a self-confident, optimistic, coalition-building leader in the style of FDR, JFK or Ronald Reagan.

Of course, it’s still much too early to say that Barack Obama has chosen to follow the disastrous path of Carterism, but it’s worth noting that the appallingly loathsome 39th President is still very much on the scene and is out promoting a new book in which he offers the current incumbent his misguided advice on Middle East Peace.

If President Obama chooses to invite the Worthless One to any sort of White House meeting, then Republicans can take encouragement from the interaction and nurture renewed hope for a big comeback within four years.