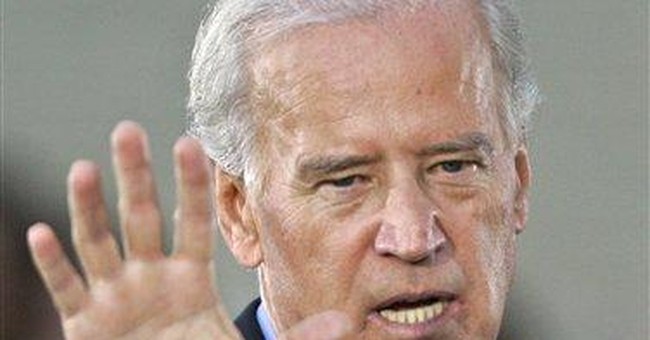 Both Joe Biden and Barack Obama appeal to the public with outrageously phony stories about their working class, blue collar backgrounds.

For Biden, the masquerade is particularly reprehensible since his pose as a "lunch bucket" Democrat from gritty Scranton, Pennsylvania played a prominent role in his selection as Senator Obama's running mate.

For instance, Kerry Kennedy (daughter of Bobby Kennedy) recently told the New York Times Magazine: "In this election, the fact that Joe Biden is a Catholic with a working-class background is going to play an important role in bringing Catholics who might otherwise vote Republican back to the fold." The Economist called Biden "a perfect example of a lunch bucket Democrat made good" and the Boston Globe hailed him as "an Irish-Catholic lunch bucket Democrat" - even though his father's family ancestry was entirely English. At the Democratic convention the Washington Post reported that Biden "accepted the vice presidential nomination of the Democratic Party with a speech that harkened back to his working-class roots in Scranton."

These descriptions suggest that Biden himself -- or at least his parents-- toiled in factories or coal mines, but his actual background counts as considerably more genteel, comfortable and white collar. His grandfather won election to the state Senate in Pennsylvania and his own father never supported the family with manual labor. Chicago Tribune columnist Steve Chapman bothered to look up the obituaries for the candidate's father (Joseph Robinette Biden, Sr.) who died in 2002. The News-Journal of Wilmington reported that at the time of his marriage in 1941, the older Biden "was working as a sales representative for Amoco Oil Co. in Harrisburg."

The summary of his career went on: "Biden also was an executive in a Boston-based company that supplied waterproof sealant for U.S. merchant marine ships during World War II. After the war, he co-owned an airport and crop dusting service on Long Island." After relocating his family to Delaware, Biden, Sr. "worked in the state first as a sales manager for auto dealerships and after in real-estate condominium sales."

In none of these jobs would the older Biden have carried a "lunch bucket" or brandished a union card. The job descriptions - "executive," "co-owner," "sales-manager," "real-estate condominium sales" identify him as solidly white collar and managerial, and in no sense working class.

The future Senator, in fact, attended Archmere Academy, a posh Catholic prep school and helped his parents to pay the steep tuition (which today stands at more than $18,000) by taking a summer (but not a school year) job. Though his academic record remained decidedly spotty (graduating 506th of 688 in his class at the University of Delaware) he still won prompt admission to law school and proceeded to win election at age 27 to the county council of the suburb where he was raised, and then to the U.S. Senate at age 29 (where he has served ever since). The talk of his "hardscrabble upbringing" or overcoming "daunting obstacles to rise to local leadership" is purest myth. Yes, his home town of Scranton is a famous example of rust belt decline, but even such struggling cities feature local gentry and families (like the Bidens) living in the upper middle class. The failure of major media to expose the deceptive image of "lunch bucket Joe" is one of innumerable examples of journalistic malfeasance in this electoral season.

While Biden makes false claims of working class roots, Obama tells similarly misleading tales of his own background of purported hardship and poverty. He describes his father as "a goat-herder from Kenya" and his mother as "a struggling single mom who had to take food stamps to feed the family." He talks of being raised by his simple, Midwestern grandparents, and identifies them as "a grandmother who worked in a defense plant during the war while her husband marched with Patton's army in Europe."

This description has been repeated so often and so lovingly by Obama's acolytes that no one seems willing to point its blatant distortions. Obama's father was hardly a simple goat herder, but rather the holder of a Masters degree from Harvard who became a prominent, politically-connected economist when he returned to Kenya. His struggling single mom also held advanced degrees - including a Masteers and a PhD in anthropology from the University of Hawaii. Her periods of financial hardship related to her pursuit of graduate studies and her many years of field work in "rural development" in remote sections of Indonesia.

Moreover, even Obama's endlessly repeated description of his parents as "a father from Kenya and a mother from Kansas" is less than accurate. While indeed born in Wichita, his mother and her parents left Kansas at the end of World War II (before her sixth birthday) and she grew up in Texas, California and, most significantly, on Mercer Island, Washington-a stylish and woodsy suburb of Seattle. Obama's mother was an academic star and ardent student leftist (who used to hang-out in a hallway designated as "Anarchist's Alley) at Mercer Island High School, then - as now - admired as the top public high school in the state of Washington.

Meanwhile, Obama talks of his grandparents' activities during four years of World War II, but seldom mentions in speeches their professional achievements during and after the time of his birth in 1961. His grandfather, Stanley Dunham, worked as manager of a furniture store while his grandmother, Madelyn Dunham, enjoyed conspicuous success as a banker. After studying at two of the finest state universities in the nation (University of California, Berkeley, and the University of Washington) his grandmother became vice president of a bank on Mercer Island, and then held a similar position with the Bank of Hawaii (where she worked for 26 years) after the family's move to Honolulu. In writing about Obama's grandmother, USA Today said "she blazed a feminist trail in Hawaii banking circles in the late 1960's and early 1970's and rose to become one of the Bank of Hawaii's first female vice presidents....'Was she ambitious? She had to be to become a vice president,' said Clifford Y.J. Kong, 82, who was a senior credit officer at the bank at the time. 'She was a top notch executive to get appointed.'"

Oddly, Senator Obama loves to cite his grandmother's brief experience as "Rosie the Riveter" in a defense plant during the war but never publicly discusses her three decades as a banking executive in Washington state and Hawaii. Her prominence and success certainly help to explain his admission to the exclusive Punahou School - by far the most prestigious (and expensive) private academy in the islands.

Like Biden, Obama has no basis whatever for describing his family background as impoverished or even "working class" - his parents were both high-achieving intellectuals, and the grandparents who raised him were successful business people. Not all bankers count as fabulously wealthy but no one could describe a prominent banking executive like his grandmother as downtrodden or disadvantaged.

Since the New Deal, Democrats have developed the annoying habit of demonizing business people and glamorizing the working class: a stupid prejudice that's produced glaring misrepresentations about the origins of both their national candidates and a stubborn refusal to acknowledge who these senators really are.