Edwards, Obama, and the Perils of Narcissism 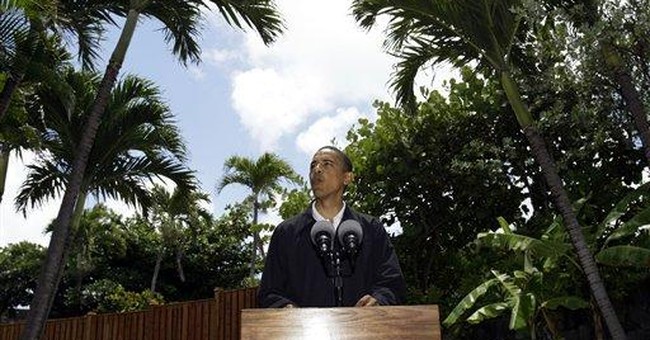 Democratic strategists loudly insist that the tawdry sex scandal consuming John Edwards will do no damage to the Obama campaign.

Despite the very public embraces between the former North Carolina senator and the presumptive nominee, Obama apologists (can we coin a new term-- "Obamapologists"?) dismiss the Edwards case as an irrelevant distraction. After all, they say that their man never seriously considered his former rival as a potential running mate or even for a major cabinet post, so the unfolding disgrace of a one-time elected official bears no connection to Barack's visionary campaign of hope, change, and global redemption.

For two reasons, however, the meltdown of the sleazy operator long known on my radio show as "The Reptilian Con Edwards" can still hurt Obama's candidacy.

First, it ought to be obvious that the way this story unfolded re-enforces the widespread public impression that media coverage of politics is biased and slanted on behalf of liberal Democrats. A recent Rasmussen survey showed that 55% of respondents already believe that major TV networks, prestige newspapers and mass circulation magazines favor Obama and the Democrats, and as this belief hardens and spreads it will encourage voters to open their minds to the messages of the other side.

Regarding the Edwards affair, mainstream media outlets have already begun questioning their decision to give the former Senator a pass on rumors swirling around him for several years. While the National Enquirer (America's new "journal of record"?) doggedly pursued the stories, more respectable reporters chose to ignore all sorts of available evidence of hanky-panky--- including the on-the-record payment of $114,000 to a blonde, new-agey space-case with no relevant experience to travel with the candidate around the world (even to Africa) making web videos about his "essence." Hillary's press aide Howard Wolfson grumbles about press malfeasance in dropping the ball on this story and thereby destroying her campaign, on the theory that an unexposed Edwards took more votes from her than he did from Barack. In any event, the whole embarrassing mess -- with the major networks and prestige papers utterly "scooped" by the National Enquirer -- underlines the notion that the press plays favorites, especially when it comes to liberal pretty boys who talk in soaring platitudes.

That raises the other, deeper connection between the Edwards embarrassment and Obama's ongoing magical mystery tour. In many ways, the two candidates offer similar packages to the voters --- handsome, youthful guys who make great speeches but campaign for president with shockingly thin resumes and no notable past accomplishments. Both slicksters show the perils of narcissism in those seeking the nation's highest office.

The shocking part of the Edwards story doesn't involve the sad fact that he cheated on his sick wife; as his forlorn defenders righly point out, he's got plenty of company (in both parties) when it comes to marital infidelity. The detail that makes this scandal so much worse than most other Washington melodramas of straying husbands is the fact that Con Ed apparently completed his affair and confessed it to his wife, before he launched his second campaign for the presidency. This means that he collected money from grandmothers and struggling farmers and idealistic teenagers in Iowa (where he finished second in the caucuses) while harboring a secret guilt that he knew could destroy his campaign. With a pregnant former mistress telling friends that Edwards fathered her baby, and with those claims appearing repeatedly in the tabloids, Edwards and his whip-smart lawyer wife Elizabeth must have known that the risks of ultimate exposure were obvious and overwhelming. After all, he authorized the payment of more than $100,000 in campaign funds to a bimbo he met in a bar-- and at least some of that money got paid to her during the time that she provided the candidate with more than video services.

The big question for Edwards, in other words, isn't why he ran into the arms of his mistress (plenty of politicians and other public figures make the same mistake). The real question is why he ran for president a second time after falling into this sleazy behavior and reputedly telling all to his forgiving wife. Consider the timing here: let's see, I've got a wife who's recovering from cancer, and our marriage is recovering from a recent affair. That's the perfect moment to run for President of the United States, right?

The arrogance that led to that deeply demented decision had already reared its ugly head four years earlier with the first Edwards-for-Prez juggernaut. When he decided to seek the nation's highest office in the year 2004, Edwards had won only one prior election in his life and served only one deeply undistinguished term in the U.S. Senate. No one looked at his towering achievements (what achievements, after all, beyond making millions as an ambulance chasing plaintiff's lawyer?) and clamored for his candidacy. He ran only because his handsome face and oratorical ability gave him some chance to win.

Rather than supporting another, more qualified contender to advance those issues he claimed to care about, John Edwards' preening self-regard -- his narcissism, to use his own word --led him to both the first presidential run and his second (despite his wife's illness and the recent dalliance with an aide). In other words, the guy noted for his 400-dollar haircuts fell so deeply in love with his own heroic image that he ignored his obvious limitations and vulnerabilities as a candidate.

This situation directly parallels the current candidacy of Barack Obama. If anything, his record of lifetime accomplishment is even less impressive than Edwards': where the North Carolinian did make a fortune as a wildly successful, sue-happy shyster, Obama enjoyed no comparable triumphs in his dreary years as a "community organizer" and part-time law professor. Moreover, the freshman Senator from Illinois has served even less time in the nation's capital than had Edwards when he made his first race, and his campaign proposals have been notably less specific and detailed than those put forward by his one-time rival.

As with John Edwards, Obama bases his entire candidacy on glamour and eloquence and emotion. Edwards could never adequately explain how he meant to close the gap between the "two Americas" he loved to talk about, and Obama has yet to define what he really has in mind (beyond higher taxes) with the "change" and "hope" he endlessly invokes.

With both candidates, there's a lingering suspicion on the part of many voters that we're really dealing with empty suits -- appealing packages, full of sound and fury, signifying....nothing.

There's also the sense that these are two guys who love to gaze longingly in the mirror, who are a bit too full of themselves, too cock-sure and glib and arrogant for their own good.

The fact that both men came from modest circumstances may help to explain their self-infatuation, but it doesn't mitigate its impact. During the primary campaign against Hillary when critics began to attack Obama for "elitism" and "arrogance" they weren't talking about an elite status based on financial resources or insider influence (even though Obama boasts both). They alluded, rather, to the smug arrogance of high intelligence, movie star looks, natural athleticism, Ivy League degrees, lucky breaks, and effortless success. All viable politicians possess robust egos --otherwise they'd never endure the ordeals of modern campaigning, obviously. But there's something about the Godzilla-sized self-love of Edwards and Obama that stands out, even in a crowd of conceited and presumptuous presidential wannabes, something that makes you long to take both men down a few pegs.

In the deepest sense, the Edwards explosion will hurt Obama because it reminds us of the core similarity of two charming, media-genic guys who believe that despite their lack of meaningful experience they are the only ones who can rescue the United States and represent "the change we've been waiting for."

There's no reason to believe that Barack Obama, with his well-advertised devotion to his charismatic wife, ever followed John Edwards' example in allowing his egotism to indulge extra-marital adventures. But even assuming an impeccable record of matrimonial loyalty, there's still an undeniable history of infatuation that imperils the Democratic campaign.

For Barack Obama, as with John Edwards, his most dangerous love affair is with himself.