Mitt's Weakness For The Top Spot Could Help Him As Veep 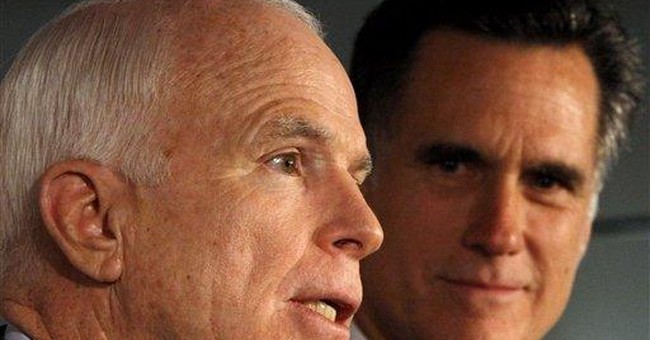 Writing in The Weekly Standard, Fred Barnes makes the case for Mitt Romney as the safest, most solid choice as John McCain’s running mate.

According to his arguments, the Mittster been thoroughly vetted by the probing press in the course of his presidential campaign, and his strong performance in debates and on the stump highlights his skill as a formidable campaigner. His business background also helps in handling the crucial economic management issues where McCain himself claims little expertise. Finally, and most importantly, his record as a serious presidential contender, an internationally acclaimed Olympics savior, and a successfully governor creates no “stature gap”. No one in press or public would ask “Mitt Who?” with the sort of surprise and bewilderment with which they might respond to the choice of a lesser known sitting governor (Pawlenty, Sanford, Palin, Jindal, even Crist) as McCain’s Veep.

And what about the glaring weakness in Romney’s presidential candidacy that led many of us to cringe at the idea that the former Massachusetts governor would top the ticket? Actually, the same flaw that doomed his drive for the top job might prove a crucial asset if he’s selected as the GOP’s Number Two.

To me (and many others), Romney’s biggest problem as a potential president involved his instincts as a panderer – an eager, palpable, almost panting desire to tell people what they wanted to hear, rather than what they needed to know. His impulses as a people-pleaser led to the reputation for flip-flops – the impression of an infinitely flexible politician with no core convictions other than an unshakable belief in his own competence and suitability for high office.

As a Vice Presidential candidate, this flexibility would help rather than hinder the man from Massachusetts.

A Veep isn’t supposed to display unshakable convictions of his own: he is, rather, expected to reflect and echo the positions and policies of the top guy. For a Vice Presidential nominee, pandering is a good thing, a necessary thing—so long as the prime focus of that pandering is the presidential nominee who selected you.

In view of Mitt Romney’s deft pivots on a wide range of issues as he geared up for his presidential run, there’s little doubt that he can re-adjust once again to back up McCain if he’s given a place on the ticket. They already agree on most of the big issues (conduct of the war, peace through strength, cutting taxes and spending, defending human life, protecting gun rights, and so forth). On other issues where there’s been disagreement between them (campaign finance reform, Guantanamo, immigration reform) Mitt can either agree to back up McCain’s positions or else remain silent.

Meanwhile, Romney’s Mormon faith always seemed like a bigger problem to some obsessed media commentators than it did to ordinary voters. In primary after primary, Mitt actually performed better among self-described Evangelical Christians (supposedly consumed by anti-Mormon bigotry) than he did among non-Evangelicals. In general, voters and the press pay little attention to the religious faith of Vice Presidents or Vice Presidential candidates (with Joe Lieberman’s exotic special case the obvious exception). Consider, for instance, that only three Catholics have ever won nomination as Presidential candidates by a major party (Al Smith in ’28, JFK in ’60, John Kerry in ’04). But numerous Veep contenders have been Catholic-- Bill Miller in ’64, Ed Muskie in ’68, Tom Eagleton and Sergeant Shriver in ’72, Geraldine Ferraro in 84—with scant attention to their faith by the public at large. Moreover, Romney’s deft handling of the religious question at his justly famous speech at the Bush Library in Texas makes it unlikely that his devout LDS commitment would count against him in any serious way.

According to Fred Barnes, the main drawback to a Romney candidacy involves the obvious fact that McCain doesn’t like him. But for the sake of party unity and victory, that discomfort could be disregarded or overcome—as JFK overcame similar discomfort to choose Lyndon Johnson. In any event, Mitt’s controversial skills at pandering should help him smooth over past misunderstandings, and show McCain as a more warm-hearted, forgiving leader than the angry, hot-tempered meanie of hostile caricature.

I’m not yet ready to endorse Mitt Romney as the ultimate choice for second spot on the ticket, but it’s increasingly obvious that he deserves the most serious consideration. For one thing, his experience in all those annoying Republican debates (in which Romney’s performance steadily, inexorably improved) gives him a huge advantage over any Democrat in the single, fateful Vice Presidential debate scheduled for this fall.

With the Democrats increasingly unlikely to field either a Clinton-Obama combo (he won’t take it) or an Obama-Clinton team (he won’t offer it), a McCain-Romney partnership would highlight the relative unity in GOP ranks.

In that context, Mac-and-Mitt sounds more and more like it could be a winning ticket for the party and the country.