Michael Hausam
|
Posted: Jan 31, 2016 12:01 AM
Share   Tweet
The opinions expressed by columnists are their own and do not necessarily represent the views of Townhall.com. 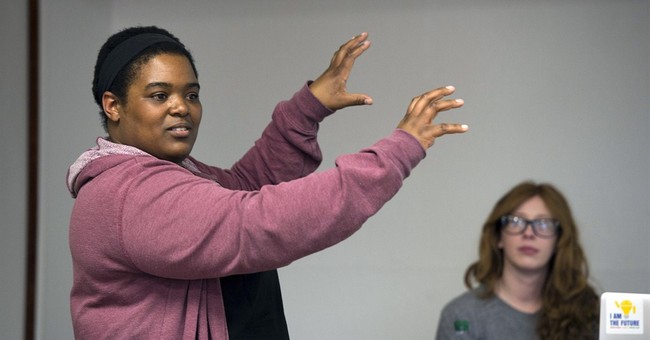 It is with a heavy heart that we must return your initial capital investment. President Obama’s recent executive action will make implementing our brilliant moneymaking plan almost impossible to accomplish.

When we released the video announcement about creating an engineering firm staffed only with women, the response was almost overwhelmingly positive. The idea was genius: exploit the pay gap between men and women to generate obscene profits. Investors, like you, lined up by the dozen, up to the point that we had to turn interested parties away. There were thousands of them.

As everyone knows, despite the laws on the books since 1963, women can be hired to work for less than men. By focusing the business on a male-dominated industry yet having a lower cost structure – paying roughly $0.77 in salary for every $1.00 that a man would have received – our prices would have instantly guaranteed market share dominance. And we would have made a fortune. An engineering company staffed and run by women has never existed.

Over the last 12 months we’ve amassed a massive binder full of women seeking employment with our organization. Hundreds of well-qualified applicants were eager to work for us. Remaining consistent with our commitment to transparency, we explained to each of them that their salaries would be at least 20% less than they would command if they were men. Only a handful objected and the lawsuits they filed have been quietly taken care of.

Among the responses to the overall investment opportunity, there were naysayers, of course. Some pointed out that the wage-gap between men and women is largely a myth. They even supplied data and documentation supporting their assertion. They maintained that the raw data – showing that men and women have different incomes – does not adjust for things like education, industry, hours worked, and other variables.

When a true apples-to-apples comparison is made, they say, the difference in pay between men and women completely disappears. It ends up such that differing incomes are almost entirely the result of choices made by individuals as opposed to structural discrimination based on gender bias.

Obviously, we totally disagreed with this, as the inability of women to command equal pay was the fundamental assumption of our business. We documented this fact by referring to claims made by Hillary Clinton, Bernie Sanders, Debbie Wasserman-Schultz,

But now the game is over.

The Equal Employment Opportunity Commission, under direct instruction from the President, has enacted a new regulation that will hobble us. Every company that has more than 100 employees will be required to report their pay scales and separate the data based upon gender. They will be actively working to discover if companies are paying men and women differently for the same job.

They estimate the cost of compliance to be around $400 per employee, which from a broad perspective is nothing, but from our perspective it’s massive. Despite the willingness of all our applicants to work for less than men, the Federal government is sure to catch on.

So, please find enclosed a check for the entirety of your investment, less a small handling charge.

We do have another idea percolating, although we’re not yet ready for a formal announcement. It has to do with playing around with the Federal definition of gender and some of the not-so-well-known cash benefit programs that exist. According to our lawyers, a person born as a man who has fully transitioned to being a woman can self-identify as a man yet qualify for some Federal programs set aside for women. There may be an opportunity here and we’ll let you know when we’ve a formal business plan put together.