Did You Know That Trey Gowdy Wants America to Lose? 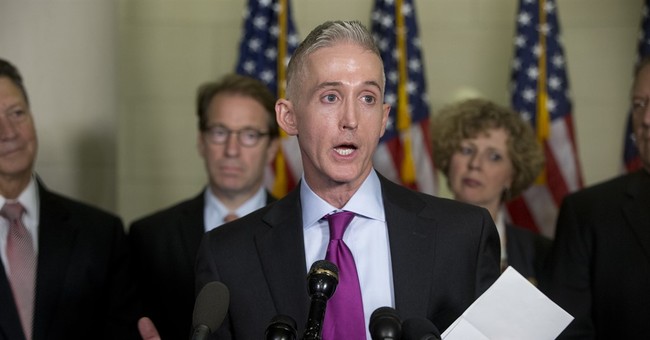 I made two serious social media miscues over the weekend and am now paying the price. Firstly, I retweeted the news that Trey Gowdy is going to support Marco Rubio. This was not well received. People are furious.

My recollection, going way back into the deep dark ancient annals of history – like 2 weeks ago or so – was that Gowdy is a well-loved and respected conservative. Videos showing him attacking helpless leftists in Congress have been like right-wing politi-porn and resulted in an effort to nominate him to replace Boehner as Speaker. He was considered an up and coming rockstar on the right.

According to the feedback on my Twitter feed, Gowdy is actually an establishment-loving moderate RINO who sold his soul to Think Progress and the Republican National Committee years ago. Furthermore, he is utterly untrustworthy and has been bungling his way through the Benghazi investigation in order to ensure Hillary’s enthronement, right from the start.

Guy Benson’s scoop included a quote from Gowdy that said this:

“Marco Rubio is a rock solid conservative and a strong leader we can trust. I look forward to campaigning in Iowa with him, and introducing my good friend to voters across the state.”

The translation of this statement, according to my best ability to read run-on breathless sentences hastily punched out in all caps, is this:

“Marco Rubio is a convictionless soulless fake who constantly lies in order to deceive all who listen to accumulate influence, power, and wealth.”

As best I can tell, the objection over endorsing Rubio is due to his immigration stance. Determining precisely what that stance is, however, seems to be a little difficult. I’ve listened to the debates and the other statements Rubio has made about immigration, including his explanation of the infamous “Gang of 8” debacle. I thought I had a decent handle on his perspective.

The second mistake I made was to post an article that makes it clear that Donald Trump is not a free-market supporting capitalist. From what I can gather here, the problem that people are having with it isn’t outing Trump as a protectionist, it’s that I apparently want all Americans to be jobless. Without Trump, America’s workforce will be sent home, as their jobs will all disappear.

In Michigan last week he stated that he would require a 35 or 40% tariff on any cars or auto parts imported into the country. The context was Ford Motor Company’s planned multi-billion dollar expansion in Mexico. During his speech, he also said this:

“I’m a free trader, but we can’t be stupid traders.”

I don’t have a post-graduate degree in economics or international trade, but I think that a tariff on imports means “NOT a free trader.”

The invective and insults I received in response included nuanced arguments like these (again, usually in all caps):

“Few people can negotiate as well as Trump!”

“Trump is magnificent and brilliant!”

“USA would benefit greatly with Trump as CEO!”

I responded with a little Econ 101. I pointed out that protectionist efforts historically have always yielded marketplace distortions and unseen consequences that outweigh any benefits. These results hurt consumers and the economy, in order to benefit a favored few. It also establishes a crony capitalist culture where those that have the means to pay for access to influence decision makers become the winners.

The response to these comments were some version of “You should just go ahead and vote for Hillary and be done with it.”

Someone else weighed in with a comment about Ted Cruz and his commitment to conservatism. As it didn’t include any misspellings or grammatical errors, as well as only using a capital letter at the beginning of the sentence, I welcomed the response. I also began to count the seconds until it too was blasted out of the water.

Lest you think I’m too cynical, this comment appeared less than one minute later:

“Cruz is lying. Canadian born Cuban, and his wife is on a task force to combine the US, Canada, and Mexico into one nation.”

There is no question about it, 2016 will be one heck of an interesting political year, that’s for sure.