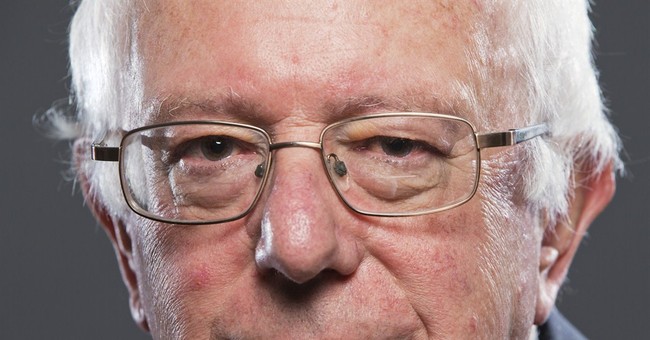 I don't know about for you, but for me, the most inspiring interview of the week occurred when CNBC's John Harwood interviewed presidential hopeful Bernie Sanders. It generated a couple of thoughts in my head that I'm confident will be game changers. I'm secretly hoping that the Sanders team will offer me a job as their Chief Economic Consultant, as a result.

Here was the part of the exchange that really got my carbon-neutral cruelty-free non-fossil-fueled engine running:

Harwood: If the changes that you envision in tax policy, in finance, breaking up the banks, were to result in a more equitable distribution of income, but less economic growth, is that trade-off worth making?

SANDERS: Yes. If 99 percent of all the new income goes to the top 1 percent, you could triple it, it wouldn't matter much to the average middle class person. The whole size of the economy and the GDP doesn't matter if people continue to work longer hours for low wages and you have 45 million people living in poverty. You can't just continue growth for the sake of growth in a world in which we are struggling with climate change and all kinds of environmental problems. All right?

You don't necessarily need a choice of 23 underarm spray deodorants or of 18 different pairs of sneakers when children are hungry in this country. I don't think the media appreciates the kind of stress that ordinary Americans are working on.

Obviously, everyone would trade economic growth for increased income equality. Having only one or two deodorant options, a handful of sneaker styles, and fewer other choices would be an incredibly small cost to bear.

The question then is "What do we do about it and how do we get there?"

It's simple: the government should determine the ideal number of options for all consumer goods and then limit production to that particular quantity.

For example, along Bernie's line of thinking, some people prefer deodorant and others anti-perspirant. Certain accommodations could be made. For those sensitive to smell, there should be a non-scented option of each, and for everyone else, a non-gender-specific scented option. That would bring the number of choices from the 23 that Bernie adroitly mentions - although in actuality there are likely hundreds of them - to a much more sensible 4. This sort of analysis could then be applied to everything.

There are certainly folks who have that kind of insight and knowledge as to what would be best for the country as a whole. Given that recent graduates of even the most prestigious of universities are jobless right now, they could be put to work at an extremely affordable level. For the most part they are all well-acquainted with the most progressive ideas of the day and so will be quite comfortable and able to make such decisions on our behalf.

This will please not everyone, of course. The first thing that comes to mind is Bernie's good buddies Ben and Jerry. Known for their progressive political viewpoints as well as their multiple and creative ice cream offerings, their decadent quantities of flavors would have to be limited by federal law as well. It may even be decided that ice cream should be banned altogether, as no one really needs it. And given that we are now collectively responsible for everyone else's health, it probably should be. All economic decisions, it must be remembered, involve trade-offs and keeping that front and center will be essential.

The result: the unleashing of an economic boom that will benefit everyone.

When businesses and entrepreneurs are forced to seek new and different products and services, that creativity will certainly yield unimaginable opportunities. Instead of going over the same old ground, effectively trying to get blood out of a mass quantity of turnip-scented Unilever-produced bathroom products, this new capitalism will end up actually doing some good. It would essentially be government-induced competition.

Another benefit would be the tremendous amount of space that would be freed up across the country within artificially over-valued real estate markets. Stores like Wal-Mart, Costco, Target, Best Buy, and others would need a fraction of the floor space they currently use. The resultant newly available square footage would be perfect for affordable housing and their convenient locations would eliminate the need for automotive transportation for most people. And that's also good for the planet.

Some might object, by pointing out places like Venezuela or Cuba or North Korea, to say that the marketplace's freedom is precisely what builds wealth and grows economies. But they miss the fact that this is America and those countries definitely are not. Americans overcome obstacles. What could be more American than giving up income growth and silly wasteful excesses at the local mall for the sake of equality and fairness?