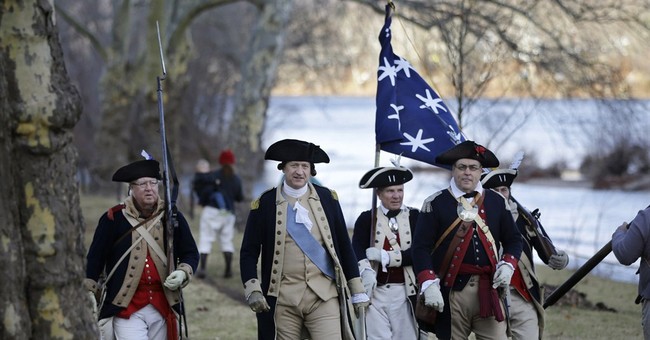 As a huge television buff, I'm uniquely qualified to render this opinion: "Turn" is the best show currently playing on any network.

It's the story of young father caught up in the American Revolution, who, trying to keep his head down and nose clean, ultimately decides to become a spy for the Continental Army. Based upon a book I'd neither read nor even heard of, Alexander Rose’s "Washington's Spies: The Story of America's First Spy Ring,” it adroitly weaves in the exploits of Abraham Woodhull with the better-known stories and events of the war.

I was first drawn to it due its star, Jamie Bell. I absolutely loved "Billy Elliott," which was his first big role, and had seen him in a few things subsequent to that. He's fantastic.

Secondly, "Better Call Saul" had ended and they'd played enough promos for "Turn" that I thought I'd give it a go.

I find the Revolutionary War period to be the most interesting in our nation's history and, given my passion for freedom and liberty, strongly identify with the fundamental motivation for the rebellion: leave us alone, George, you tyrannical overbearing fundamental rights-stealing despot.

Every day I find myself thinking similar thoughts about our current government, so there's that, too.

As a television show, it totally works. There's sufficient character development, action, and conflict to hold fast the attention of the most stringent of critics. Being a period piece, it's certainly limited as to dialogue and such, and although that may not be everyone's cup of tea, it doesn't seem forced or fake. Right from the start I had to remind myself: of course everyone has a British accent, at that point they WERE British.

One of the things I find most fascinating is the conflicts between the characters about their allegiance to the crown. For some reason, I'd not given that aspect much consideration. The narrative about how families were torn apart during the Civil War, with brother fighting brother or some such thing, seems to be a much larger part of that period's general historiography. One of the most significant conflicts in the show is how the main character, in siding with the Continentals, is violently rebelling against his father's wishes and counsel.

The most meaningful and emotionally moving theme in the show, however, is the ever-constant reiteration of the fundamental motivation for the revolutionary struggle itself: freedom and self-determination. Rarely a scene passes without some reference, direct or oblique, about the essential nature of liberty and its contribution to life and the pursuit of happiness.

Part of the poignancy of that message is how the results of that hard-fought freedom are being treated today. Individual liberty and responsibility are given token acknowledgement in 2015's America, but most of those statements ring hollow. We are not a free people, at least in the sense that the writers of the Declaration of Independence or Constitution envisioned.

Relative to the massive overreach our current state and federal governments make every minute of the day, the concerns of the original colonists seem almost trite. Yet thousands gave their lives and thousands more risked them to throw off those collars.

The Boston Tea Party was organized due to a cronyistic relationship between the East India Company and the British government. Wanting to have influence over the massive and distant bureaucracy that imposed itself upon the citizens was the fundamental concern that yielded the rallying cry, "no taxation without representation."

If that which Americans in 1776 called "abuses and usurpations" were the totality of the governmental command and control we were subject to today, our liberties and freedoms would be manifestly greatly than they are. As a result, in watching Abe Woodhull scheme and strategize in "Turn" to push back against his oppressors and contribute to their utter defeat, I can't help but think that we need a man like that here and now in America.

Go watch the show, in the midst of its second season on AMC, as soon as you can.