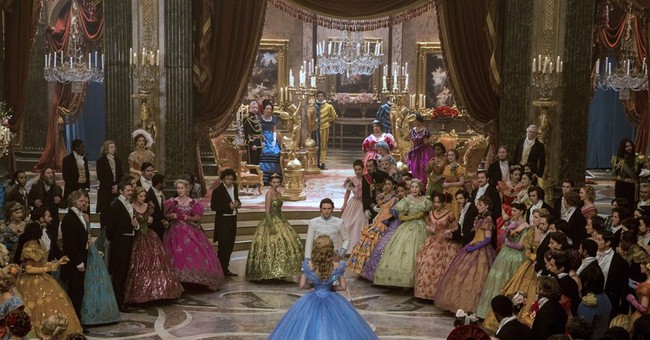 I took my two youngest daughters to see "Cinderella" this weekend and was one of the hordes that propelled the movie to over $70 million in weekend box office receipts. They'd been asking about it since the first trailer aired and, having spent the majority of their eight years passionately committed to all things Disney and princess-y, I had no choice. We were seeing that movie on opening weekend.

The girls, of course, loved it; but afterwards I had to sit them down to explain the horrific themes and agendas the film advanced. Knowing beforehand that there had been some controversy over certain aspects of the movie, I was ready to be offended, but I had no idea the limits to which the creators would go to weave utter nonsense into the classic story.

I proceeded to squash all of the jelly out of their donuts as a result of the problems the movie contained. It was brutal but a father's job isn't necessarily always a fairy tale. My hope is that they heard me and will have grown in knowledge and sensitivity as a result.

Firstly, it creates an unrealistic expectation of male attractiveness. Ella's father: handsome. The prince: incredibly handsome. I had to point out to them that the vast majority of males are nothing special to look at and that based upon that brutal fact, they shouldn't expect any men in their future lives to have notable good looks. Even the King, on his deathbed, had amazing hair. Totally unrealistic and wrong.

I explained that roughly half the people they'll ever run into will be of the male gender and they'll have a lifetime of culturally-dictated standards of attractiveness pounded in to them. That will not yield positive effect. I urged them instead to resist the temptation to accept these exploitative ideas.

Secondly, there was an astonishing lack of concern about carbon footprint and pollution. Torches and candles were everywhere, especially in the palace. Communicating to me that I've insufficiently educated them as to the pending destruction of our planet, they asked how would anyone have been able to see at night without such lighting. Of course, such concerns are secondary compared to the effects from the burning of wood, oil, or oiled cotton candle wicks.

Given Disney's environmental agenda, it's grievous to me that they missed such a great opportunity to spread that message. Imagine the power of this image: the throng of attendees of the prince's ball, in pitch black darkness, excitedly discussing the their pride in the lack of fuel consumption or night-light blight upon the countryside. Forget about dancing, dresses, and marrying princes, but imagine zero-carbon footprint living! I was sickened that this wasn't properly addressed and made sure that my little ladies understood its gravity.

Another glaring omission was the complete absence of same-sex couples. Of course, this was a tad difficult to bring up with my girls. That they are only eight and almost nine -- and not in a Los Angeles or San Francisco public school where by now they'd be completely familiar with and totally supportive of the concept -- forced me to be less direct than I would've wanted. I did communicate that any and all choices one makes in life are equally valid and deserving copious amounts of applause, and so that'll hopefully set the stage for more detailed discussions as they get a little older.

The last problem I had with the movie was that those whose backs had been trod upon, the serfs and subjects who'd broken their backs for the sake of enriching the king, were given no mention. The palace was this huge and amazing structure, the obvious fruits of unseemly theft from the populace. But there was no mention of that injustice, not even a nod in its general direction. It would have been SO easy for even one scene to have a simple little protest or march highlighting the point. But there was nothing.

I explained that any perceived inequality of wealth distribution was defacto proof of injustice. They needed to be told that it is unimaginable that gains could be anything but ill-gotten and they would do very well to be wary of such dichotomies in their own lives. They questioned this, as you can imagine, especially since the king and prince seemed like such gentle and caring souls. I responded by stating that no matter how well their subjects were treated and whether or not fairness was the apparent rule of the land, it is incumbent upon any persons with more assets than others to give them away. Or they should be taken away (which is another social-justice-lesson opportunity the moviemakers missed, by the way).

As I've spent years establishing myself as the primary male-gender identifying figure in their lives, I hope that I was able to get through to them. I think I did. Understanding that it takes a village to successfully raise progressive children, I urge you, when and if you happen to have the pleasure of running into my daughters, to take care to reinforce the message I gave them. Our collective future depends upon it.