Please GOP, Remind Us Again Why We Gave You Control of Congress 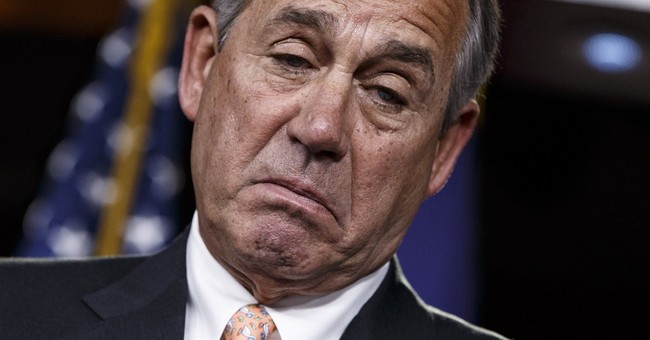 Remember how some thought a GOP majority in Congress would lead to a meaningful change in direction? Remember the promises from John Boehner that on a crucial issue he would whip a minority GOP votes to join 100% of House Democrats to oppose a strong majority of House Republicans?

I remember the former but have no recollection of the latter. Given this week's approval to fund the Department of Homeland Security, it turns out that the latter happened and the former is an extraordinarily distant memory. Less than 1/3rd of Republicans joined every single Democrat in voting for the bill. In other words, the results were almost identical to those that would be expected if the clock were rolled back to 2009, Pelosi was the Speaker, the GOP was in the minority.

The Daily Kos described it this way, "Boehner caves, Pelosi triumphs..." in their headline for the story.

The first sentence in the Washington Post's article began with "Boehner surrendered Tuesday to Democratic demands...".

During the middle of the fight to avoid a DHS "shutdown," soundbites abounded with dire warnings if the Republicans didn't relent and continue the funding; Pelosi released a statement and said:

“The world is far too dangerous for House Republicans to show so little regard for the security of American families. Republicans should join with Democrats to keep the American people safe, protect our homeland, and bring a clean, long-term DHS funding bill to a vote immediately.”

We know that to be a completely false and hyper-dramatic absurdity, as 85% of DHS employees are considered essential. In other words, almost every person there would NOT have been affected by a shutdown. One assumes that each night around 5 PM most of the "essential" employees go home for the evening and they probably also take Saturday and Sunday off as well. Yet no one clamors for 24-hour shifts and 7-day workweeks for every single DHS worker.

Certainly Boehner and the 74 others who voted with him knew this. So why did he cave/surrender?

Reports are that the Speaker thought the fight was unwinnable. After the vote, making reference to the bill passed in January that included amendments that directly countered the President's amnesty actions, he said this:

“The House has done its job by passing legislation to fund DHS and block the president's executive actions on immigration. Unfortunately, the fight was never won in the other chamber. Democrats stayed united and blocked our bill, and our Republican colleagues in the Senate never found a way to win this fight.”

So it was Mitch McConnell - who happens to lead a majority of his own - that was the problem. Got it.

Perhaps it moved him to tears that a former DHS chief-of-staff spoke to the Washington Post about the morale problems a funding halt would present? Or a concern that despite the results of last Fall's elections that he really thinks that bipartisanship is what America really needs or wants?

Whatever the actual motivation, the Democrat tactic of interpreting any and all electoral wins as a mandate is something the Republican leader certainly is not on board with. In that vein, one can reasonably wonder what good is a majority if you don't do anything with it. So far, the answer is "none at all."