Will the GOP Leadership Be the Ones to Deliver Gun Control

Michael Hammond
|
Posted: Dec 03, 2017 12:01 AM
Share   Tweet
The opinions expressed by columnists are their own and do not necessarily represent the views of Townhall.com. 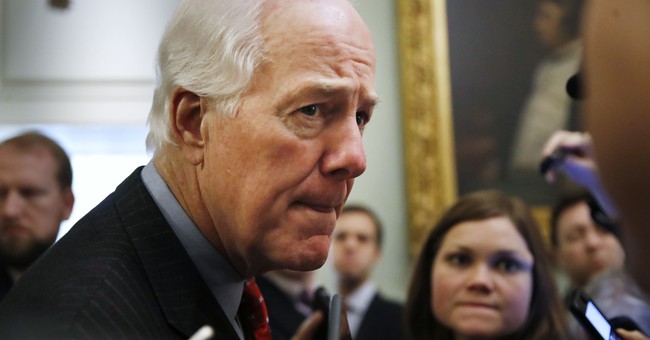 If you were the GOP congressional leadership and WANTED to lose both the House and the Senate in 2018, how would you do it?

I would suggest that there is no better way than to turn the GOP into the party that "finally delivered gun control." And this is after an eight-year stalemate under Barack Obama, when the anti-gun movement suffered one demoralizing defeat after another.

Senator John Cornyn, the Senate's number two Republican, is doing the "happy dance" with his new friends and cosponsors Chuck Schumer, Dianne Feinstein, Richard Blumenthal, and Chris Murphy -- over their new bill which could impose gun bans on millions of Americans.

You remember Chris Murphy?  He was the guy who said that God didn't listen to the prayers of gun owners -- except for their prayers for forgiveness for not doing more to ban guns.

And the 51-49 final passage vote on the tax bill reiterates that Schumer and his Democrats are committed to destroying every single element of the Republican agenda.

So, why is Cornyn trying to "hot line" a major victory for Schumer -- a victory which would resurrect the anti-gun movement -- a key component of the Democratic electoral coalition?

The Cornyn-Schumer-Feinstein-Blumenthal-Murphy bill is S. 2135.  And what it would do is push hard to make sure that the agencies and states submit every conceivable eligible name the the FBI's list of persons banned from owning guns, called the NICS list.

"Enforce the law" has been a mantra for squish Republicans.  So, you may ask, what's wrong with making sure every single eligible name reaches NICS?

The answer is that the "dirty little secret" of NICS is that the prohibited persons law (18 U.S.C. 922(g)) and its interpretation under a 2007 law and its regulations are so perverse that, if actually enforced to the letter, they would ban guns from millions of additional law-abiding Americans.

Granted, there are a few really bad people who are not on NICS.  That will always be the case.  And, if NICS ever actually stopped a bad guy from getting a gun, maybe this wouldn't be so irrelevant.  But you don't use a nuclear bomb to kill a mosquito.

Take recipients of federal entitlements like Social Security, Medicare, Medicaid, CHIP, ObamaCare, etc.  Under the federal regulations implementing the 2007 law, at 27 CFR 478.11, you are banned from owning a gun if a "lawful authority" (i.e., a government "shrink") determines that you are "a danger to [your]self or to others; or ... [lack] the mental capacity to ... manage [your] own affairs..."  Under this language, over 257,000 law-abiding veterans have lost their guns, because a VA psychiatrist diagnosed them with PTSD and therefore appointed a guardian to manage their checkbook.

Barack Obama, legally, extended this principle, and implemented regulations to troll SSI disability rolls for people with guardians and, potentially, people with PTSD, ADHD, Alzheimer's, postpartum depression, OCD, and so forth.

Congress was horrified, and disapproved these regulations earlier this year.  But when the next anti-gun president determines that the Cornyn-Schumer bill requires him to do the same with all other entitlement programs, there will not be a 2/3 majority in both Houses of Congress to overturn his veto.

My mother owned a gun until her death of Alzheimer's at 89.  Many seniors have gun collections they never use -- but would like to pass on to their kids.  No one has made the case that what we need is a massive across-the-board gun ban imposed on seniors -- and enforced by a California-style confiscation program.

If this doesn't bother you, how about 18 U.S.C. 922(g)(3)'s ban on marijuana smokers?  Under Cornyn-Schumer, states would be required to turn over to the FBI medical marijuana lists, and lists of persons in diversion and medical treatment programs.  Incidentally, the FBI still regards all of these people as federal felons.

Or what about the roughly 13% of all Brady Law denials occurring under 18 U.S.C. 922(g)(2) -- a scary "fugitive" category which normally means that the person had an unpaid traffic ticket while on vacation?  This is actually happening now, and is a major issue.  Are we going to turn in the names of all "renegade parkers" who haven't paid their fines?

If your answer is "That would be stupid",  well, guess what?  Cornyn-Schumer is stupid.  It is the sort of brainless solution which is concocted by politicians looking for a sound bite, who don't know what they're doing.

The good news is that there is still time to kill the Cornyn-Schumer bill -- and to saddle it with a "killer amendment," as the House seems prepared to do.  If the congressional GOP has any desire to continue holding the reins of power, this is exactly what it will do.

Michael Hammond is the General Counsel of Gun Owners of America