US Senate: Shredding the Second Amendment Is Not Your Job!

Michael Hammond
|
Posted: Apr 19, 2016 12:01 AM
Share   Tweet
The opinions expressed by columnists are their own and do not necessarily represent the views of Townhall.com. 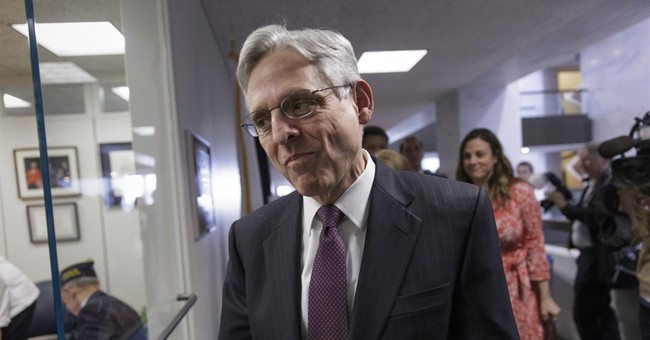 As usual, the Obama game plan is that, if his lapdog allies repeat his dimwitted mantra (“Do you job”) ten million times, it will somehow seem less stupid.

The rejoinder is obvious; although not so obvious that I’ve ever seen it in print. It is this:

Make no mistake about it: Merrick Garland is a Leftist in every sense of the word. He is worse than anyone Hillary Clinton could nominate.

Garland voted for the extraordinary step of rehearing en banc a D.C. circuit panel’s pro-gun decision in Heller/Parker. Aside from holding a public bonfire of confiscated guns, it is hard to hate the Second Amendment more than this.

And, yes, although Garland was joined by a Bush appointee, Garland’s vote was not, as the press suggests, merely out of intellectual curiosity. When a comparable case -- in Seegars v. Gonzales -- was decided differently two years earlier by an anti-gun panel of the same court, Garland voted against rehearing en banc.

But the Second Amendment is not the only provision of the Bill of Rights which would be ripped to pieces by Garland. Garland has stated that unconstitutionally procured evidence should be excluded only under “extraordinary circumstances.”

And he has never met an overreaching “executive action” that he did not rubber stamp -- with the possible outlier of ozone regulation which the Sierra club contended did not go far enough.

Thus, Garland has written the Second, Fourth, Fifth, Sixth, Eight, Ninth, and Tenth Amendments out of the Constitution. And Article I, Section 8, as well.

His jurisprudence would thus countenance an unlimited government with no supervision -- power without boundaries, and a citizenry with no rights.

There is a special place in hell for people who view this as somehow “conservative.” And, by the way, it isn’t the “moderately hot” part.

Oh, and one more thing: As a student, Garland was the master strategist to keep ROTC out of Harvard. Thus, while ROTC students like me were preparing and expecting to be shipped off to Vietnam (without justification, in my case), Garland was making sure that his elite lily-white school was not sullied by cadets like us.

So, no, Orrin Hatch and other Establishment foot-kissers aside, everyone doesn’t “agree” that Garland is a moderate. Once again, Hatch has been “too cute by half” and was outwitted, which happens a lot with him.

Finally, as was the case with gun control, Obama is now harping on a new set of phony polls purporting to show support for hearings. Seldom discussed are findings in those same biased polls that respondents know nothing about Garland. Hence, their response to the issue in vacuo couldn’t be more meaningless.

So let their calls to shred the Second Amendment flush Russ Feingold, Ted Strickland, and Maggie Hassan down the drain. All Republicans need to do is pull the handle and get out of the way.