The Supreme Court Vacancy: A Criminal Who Doesn’t ‘Leave Fingerprints’ Is Still a Criminal

Michael Hammond
|
Posted: Mar 12, 2016 12:01 AM
Share   Tweet
The opinions expressed by columnists are their own and do not necessarily represent the views of Townhall.com. 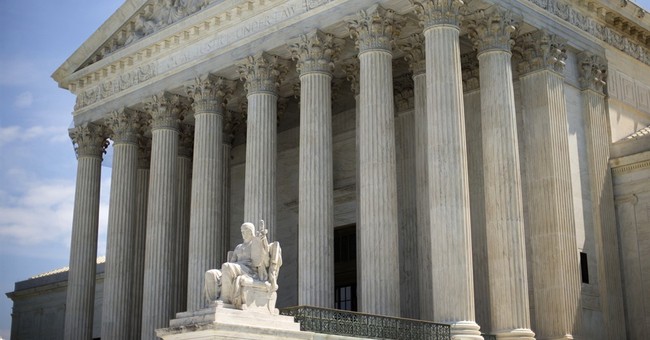 As I predicted, Barack Obama is preparing to bludgeon the Senate into fundamentally reshaping the Supreme Court, and he is reportedly preparing to do this by nominating a "closet liberal" with "no fingerprints" with respect to any major issue.

Leftist media of all stripes are pressing for "they deserve a vote" hearings. The nominee would parade before the

Judiciary Committee with their photogenic family, and would lie under oath concerning their open-mindedness on every significant judicial question. And, incidentally, you can be sure that, before being chosen, the nominee will have given assurances to the Justice Department and Barack Obama that they would be a dutiful and reliable stooge in implementing Obama's agenda.

We saw this before with Elena Kagan and Sonia Sotomayor. Remember how they professed to be "open-minded" on issues like ObamaCare and the Second Amendment.

Not only did Kagan and Sotomayor turn into mindless puppets for Obama's agenda. In the McDonald case, which didn't deal with the question of whether the Second Amendment was an individual right, Sotomayor, Ginsburg, and Breyer were so "chomping at the bit" in their hatred of firearms that they gratuitously opined, in their dissent, that the Heller case should be reversed.

In other words, the one "job qualification" that every Obama Supreme Court nominee has passed is the requirement that they be pathological liars.

Fortunately, those of us who led the fight against Loretta Lynch's AG nomination have made her sufficiently toxic so that we have been spared another battle over her, even though she was reportedly Obama's first choice.

First, since when has it become a prerequisite to being a Supreme Court justice that the candidate be so vapid and inexperienced -- and/or so dishonest -- that they claim to have no record and no opinion on any significant issue?

Second, once the process begins to go forward, do not assume that Harry Reid and Chuck Schumer will not try to "nuke" the vote. Thus, they would only have to break off four RINO's. And you can bet that the pressure in Illinois, Wisconsin, Ohio, Pennsylvania, and New Hampshire (and also Maine) will be withering. This, incidentally, notwithstanding the fact that Harry Reid, when he "nuked" the Senate in November, 2013, purported that his lawless actions didn't extend to the Supreme Court.

So here's a summary of the most recent gaggle of losers and liars who have been floated for a lifetime appointment:

Patricia Millett (from the D.C. Circuit) (dead on arrival):

Millett is on the bench only because Harry Reid blew up the Senate rules in 2013 and forced her nomination through with fewer than 60 votes (56 votes). If Obama wanted to gratuitously shove a stick in the eye of seething Senate Republicans, Millett would be his choice.

Paul Watford (from the Ninth Circuit) (dead on arrival):

In 2012, when Senate Republicans held only a minority of Senate seats, Watford was shoved through with the support of only 9 GOP members (Alexander, Snowe, Murkowski, McCain, Brown, Collins, Graham, Kyl, Lugar). Four of these are no longer in the Senate; at least two were purged because of votes like this. In particular, opposition to Watford centered around his opposition to the death penalty and his opposition to Arizona's anti-illegal immigration laws. On the 9th Circuit, he voted to strike down Arizona's law automatically denying bail for illegals.

Jane Kelly (from the Eighth Circuit):

It probably tells you something that both of these candidates parlayed a Harvard Law School education into a career in the public defender's office.

Jackson's notable example of sticking her head out of her hole was when she excoriated the D.C. Department of Corrections for not granting "reasonable accommodations" to a deaf inmate. Because D.C.'s efforts to comply with the ADA had only been "half-hearted," Jackson ordered, essentially, that the prison pay damages to the criminal.

Kelly has given more than 30 speeches, but she refused to make them available to the Judiciary Committee, claiming that they were from "rough, hand-written notes" which she threw away. At a time when Hillary Clinton will be making the same "I know nothing" defense, this exculpatory excuse may be a little too much to take.

Sri Srinivasan (from the D.C. Circuit):

Srinivasan is being sold by the White House as a "moderate," but those who have studied his record characterize him as "left of Ruth Bader Ginsburg" or, more charitably "somewhere between Kennedy and Souter." When asked what recent member of the Supreme Court most resembled him, Srinivasan claimed that he didn't know enough about the court to answer that question -- an obvious lie.

Srinivasan was on the legal team representing Al Gore in 2000, and one of his two published writings attacks voter ID's.

Merrick Garland (from the D.C. Circuit):

Garland clerked for William Brennan, and his significant service, before being nominated to the court by Clinton, was in the Justice Department under Janet Reno.

The bottom line: It's not as though any of the people on Obama's short-list are "moderates." Rather, they are puppets who have consistently lied under oath to the Senate Judiciary Committee (a federal crime under, inter alia, 18 U.S.C. 1001) and have falsely claimed that they had no opinion on any major issue -- a position which, in saner times, would have disqualified them from their CURRENT posts.

But make no mistake about it: If McConnell and Grassley were to relent and allow this sham process to go forward, the media would portray them as saints.

The inevitable conclusion is that, the sooner Senate Republicans make it clear that "there's nothing to see here, folks!", the less painful it will be for them.