Michael Hammond
|
Posted: Feb 10, 2016 10:41 AM
Share   Tweet
The opinions expressed by columnists are their own and do not necessarily represent the views of Townhall.com. 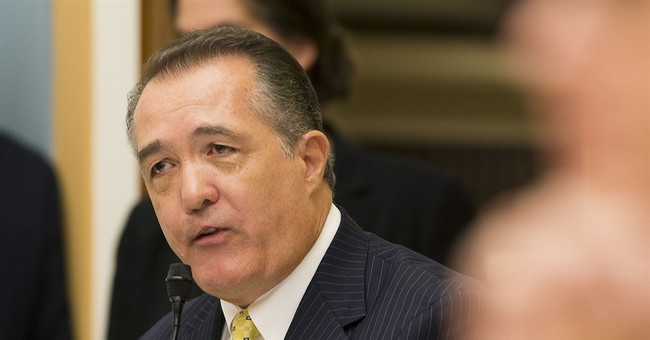 Congressman Trent Franks (R-AZ) did not invent his invective about "stealth filibusters" when, earlier this week, he bloviated in the Wall Street Journal in opposition to the Senate's protections for minority members.

No, the narrative was pushed a few years earlier by Democrat freshman Senators Jeff Merkley (D-OR) and Michael Bennet (D-CO), who felt that filibusters impeded their ability to bulldoze Republicans and enact Barack Obama's agenda.

And, like Merkley and Bennet, Franks may learn, soon enough, that in Washington, today's impatient majority rapidly turns into tomorrow's imperiled minority -- railing about its irrelevancy in the face of rules which don't recognize that the minority has any rights.

Franks, in particular, wants to reach over into the Senate and abolish, by fraud if necessary, that body's filibuster of motions to proceed to legislation.

Franks cannot be expected to know that if the filibuster of the motion to proceed did not exist, Obama would have probably succeeded in passing "immigration reform" into law in 2013. In the case of that bill, the House was threatening to blue-slip the Senate-passed measure as a Senate-initiated revenue bill -- prohibited by the Constitution. Had Harry Reid been able to quickly tack the Senate-passed bill onto a minor House revenue measure, all that would have remained is for Pelosi to pick off blue-state Republicans, one-by-one, as signatories on a discharge petition. The Senate's cumbersome processes saved Franks and his House counterparts.

But that's the problem with editorialists who have much zeal and little knowledge. In particular, Franks' arguments are based on two crazy assumptions, each more delusional than the other.

The first is that it makes one whit of difference whether the House's go-nowhere bills die in the Senate -- or die at the stroke of the president's veto pen. It doesn't. In fact, if Bernie Sanders advances, it may be more important in the 2016 elections to pin him down than to pin down an exiting Obama.

Franks' second mistake is to assume that Republicans will control both the Senate and the White House in 2017. We don't know that. And if they don't -- and if the Senate has no rules -- gun control, abortion-on-demand, alternative lifestyles, tax increases, new government programs, card check, liberal Supreme Court nominees, and the entire liberal agenda would be passed and will transform the country. And don't think the blue-state Republicans in the House are not going to push those things into law.

Franks' short-term concern is not misplaced. Faced with the choice between approving all of Obama's agenda on an omnibus -- or shutting down the government a month before the election -- Paul Ryan and Mitch McConnell are undoubtedly going to surrender this fall.

But if House Republicans don't like their leadership, they have no one to blame but themselves.

Last session, there were plenty of unused vehicles conservatives could have used to rein in Barack Obama's unlawful actions -- ranging from the "doc fix" to the highway bill to fast-track to the education bill to the Omnibus to the Cromnibus. This session, there will probably be at least a few: sentencing reform, opioids, Puerto Rico, the FAA. And the beauty of using Obama "legacy items" as vehicles is that he won't be able to blithely dismiss them with a stroke of his pen.

Finally, there is an assumption, among House conservatives, that senators care as little about the Senate as the House does. It is not necessarily true that a narrowly divided Senate will move to permanently destroy the institution.

So be careful what you wish for. Over my forty years in Washington, there is nothing which has stopped the liberal agenda as consistently as the filibuster -- not the courts, not the White House, and certainly not the House.

Conservatives would be fools to throw away their most powerful tool with abandon.