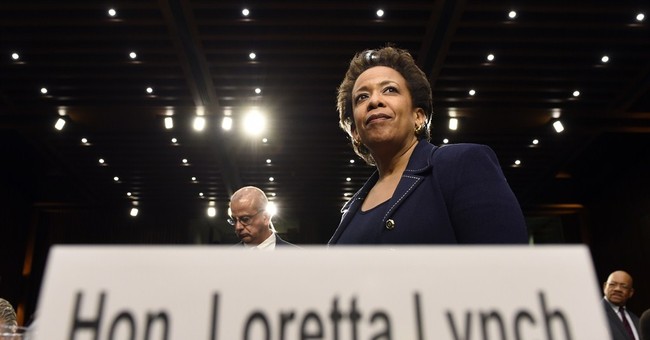 It's the BIGOT GAME.

And here's how it works.

Senate Republicans have a real problem with AG nominee Loretta Lynch. She was, to put it charitably, weasely under oath. She's anti-gun, and will surely use the powers of her office to implement a semi-auto ban, which she favors, by executive fiat. And she indicated that she will throw out the law and the Constitution to carry out Barack Obama's unlawful orders.

So Senate Democrat Whip Dick Durbin last month went to the Senate floor and, in violation of Senate rules, compared his Lynch-blocking GOP colleagues to segregation-era bigots. He never apologized.

At the end of last week, Obama Press Secretary Josh Earnest called Senate Judiciary Committee Chairman Chuck Grassley "duplicitous." Grassley had correctly observed that Lynch wasn't confirmed by the Democrats when they were in control of the Senate because they were too busy packing the courts with anti-gun liberals -- an accusation which former Democrat Judiciary Committee Chairman Pat Leahy acknowledged.

Not to be deterred by the truth, however, Harry Reid is now threatening to seize control of the Senate because of his impatience with Mitch McConnell's stewardship.

And Barack Obama went on a rant during an unrelated press conference on U.S.-Italy relations. Obama compared Lynch's wait-time to "the previous seven attorneys general," framing the issue so as not to mention that Democrats invented the strategy of blocking nominees for ideological purposes -- during the Reagan administration. It's called, not coincidentally, "Borking."

Finally, Obama repeated the lie that "everybody" agrees the ethics-challenged Lynch is "qualified," apparently believing that a lie, repeated with sufficient frequency, becomes the truth.

And Saturday morning, in pieces that seemed oddly coordinated, both the New York Times and the Washington Post published "news" articles speculating on the racial motivation for holding up the Lynch confirmation.

Mitch McConnell is reported to be prepared to hoist the white flag of surrender in the face of this barrage of insults.

If he does, you can expect that THE BIGOT GAME will become a standard way of doing business -- to an even greater extent than it is now.

Understand this: If you give a bully what he wants, you have guaranteed that the bullying will never end.

Take into consideration, also, that, if Democrats retain the White House, Lynch will almost certainly be nominated to replace Anthony Kennedy or Antonin Scalia on the Supreme Court. And, if Republicans believe they are experiencing pain now, wait till the "swing vote" for the entire federal judiciary is on the line.

So the GOP is now in the unique position of choosing how miserable it wants to be. When you feed a test animal, you get more of the same behavior. And confirming Lynch will be the ultimate reward for the Democrats' loathsome campaign.