Michael Hamilton
|
Posted: Jun 09, 2017 12:01 AM
Share   Tweet
The opinions expressed by columnists are their own and do not necessarily represent the views of Townhall.com. 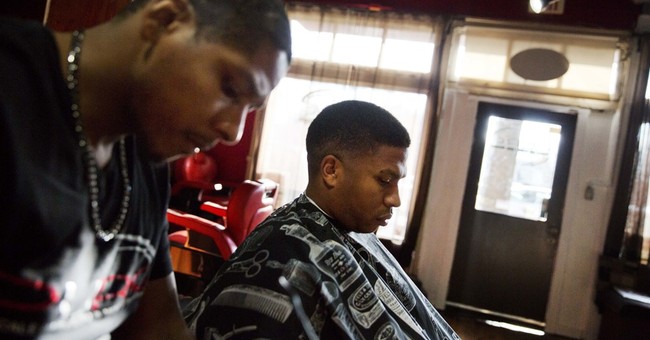 An ex-convict and entrepreneur, a barber for several players on the Green Bay Packers, could be forced to shut his doors thanks to an occupational licensing law resembling regulations that have long choked the supply of health care providers.

But if lawmakers really want to understand how occupational licensing chokes provider supply, they should visit Albert Walker’s Imago Dei Barber Lounge in Green Bay, Wisconsin—while they still can.

“As a Chicago gang member in the 1990s, [Walker] spent time in prison for attempted murder, kidnapping, drugs, and auto theft,” according to a Wisconsin Policy Research Institute video uploaded to YouTube on May 17. “When he was released, Albert pursued his love of cutting hair, eventually attending cosmetology school, earning his license and becoming a stylist for a number of the Green Bay Packers.”

A Wisconsin occupational licensing regulation now jeopardizes Walker’s ability to serve customers by requiring him to obtain a manager’s license to operate his own facility “despite his education, license, experience, investment, and customers,” the video states.

Occupational licensing laws essentially require people to obtain certification from the state before representing themselves as professional service providers, even if the market already demands their services. Officials usually purport to enact such laws for safety reasons. The laws imply lawmakers’ distrust of consumers and employers to use sound judgment when hiring service providers.

“They’re asking for 4,000 hours of training under another licensed cosmetologist manager,” Walker says. “I’ve got to go pay somebody else with less experience than me—to manage my shop. … A lot of this red tape stuff—all it does is restrict guys like me, and it forces us just to give up, and we end up going back to prison.”

Wisconsin lawmakers have before them a bill that would  remove the manager’s license requirement, Senate Bill 109. If passed, the measure would allow consumers, instead of regulators, to choose who cuts their hair.

While they are at it, lawmakers in Wisconsin and 45 other states should remove occupational licensing barriers restricting the supply of health care providers. For most medical school graduates, the next step toward practicing medicine and earning board certification is completion of a residency training program. But almost 5,000 graduates failed to place in a residency program in 2017—or more than 8,000 when counting non-U.S. citizen international students and graduates, according to “Addressing the Physician Shortage by Taking Advantage of an Untapped Medical Resource,” a May 31 report by The Heritage Foundation.

States could put these medical graduates to work immediately by letting them obtain “provisional medical licenses,” with which graduates could “enter into collaborative, contractual agreements with practicing physicians who agree to supervise the trainees,” the report states. Arkansas, Kansas, Missouri, and Utah have already passed legislation of this kind.

Allowing provisional medical licensure would give doctors and hospitals more flexibility to staff their offices. No doctor or hospital would be forced to employ and supervise a trainee with a provisional medical license, just as dentists are not forced to employ and supervise dental therapists in the few states that have legalized that profession.