Michael Hamilton
|
Posted: Mar 09, 2017 12:01 AM
Share   Tweet
The opinions expressed by columnists are their own and do not necessarily represent the views of Townhall.com. 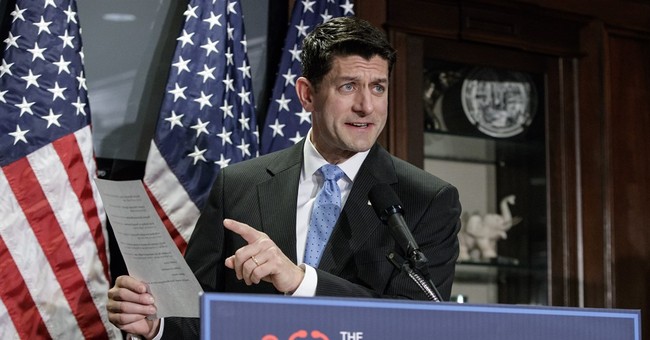 Conservatives and libertarians, lawmakers and pundits, can and will debate ad infinitum about the need for House Republican leaders to ensure their latest Obamacare replacement bill is politically palatable, even at the expense of some idealism.

The latest bill favored by House GOP leaders—the American Health Care Act (AHCA) released on March 6—appears to make unnecessary concessions out of the gates. Even if passing AHCA proves to be the only politically viable path forward for replacing Obamacare—and I think it is too early to grant it this status—Republicans should claw back ground they obviously should have kept all along.

For example, House Republican leaders pride themselves on removing the individual mandate and tax penalty for individuals who don’t buy insurance, but the GOP leadership’s latest draft bill replaces the Obamacare mandate with a premium penalty.


The bill states insurers “shall” charge a 30 percent “penalty” to buyers who fail to present “certificates” proving continuous coverage. Some analysts have construed this provision of the bill as giving insurers permission to charge patients extra. The text itself, though, provides no permission, but an edict, in subsections titled “Penalty Applied” and “Amount of Penalty”:


If Republican leaders deem it essential to spur patients to maintain continuous health insurance coverage, they could at least change “shall” to “may,” and change “equal to 30 percent” to “up to 30 percent.” These benign revisions would remove the GOP mandate and preserve the possibility insurers would compete on price for the business of patients with lapses in coverage.


If this mandate goes into effect, insurers will price their plans competitively only for buyers who can demonstrate no lapse in coverage. The mandate removes any possibility of insurers responding to market signals of patients who did have lapses in coverage. Those signals would be effectively blocked from transmission by the mandated 30 percent penalty.

This is ill-conceived, considering Republicans have long promised their Obamacare replacement plan would result in an insurance market more responsive to individuals who have experienced lapses in health insurance coverage. This mandate would tune out those patients.


For example, the latest plan does not appear to consider members of health care sharing ministries, which Obamacare exempts from the individual mandate and tax penalty, as eligible for the health insurance tax credit. Nor does it appear to recognize them as having continuous coverage for their health care expenses. This is backward, considering HCSM members have shared each other’s health care costs more efficiently and effectively than insurance markets for the past 25 years, and especially during the reign of Obamacare.


Before approving AHCA, House Republican leaders should comb through it to claw back needless concessions and impositions—things Democrats and centrist Republicans either don’t care about or to which they object so strongly they will never support anyway. Letting insurers set their own, competitive penalties for lacking continuous coverage would be a start.


Congress and President Donald Trump’s focus should be on decreasing the federal government’s footprint in the health insurance and health care markets, thus creating more room for states to implement any number of state-level reforms recommended by The Heartland Institute.