Michael Hamilton
|
Posted: Feb 16, 2017 12:01 AM
Share   Tweet
The opinions expressed by columnists are their own and do not necessarily represent the views of Townhall.com. 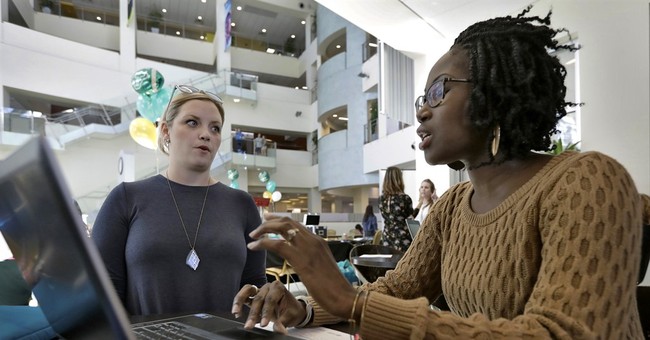 Lawmakers who failed to display appropriate affection for their constituents leading up to Valentine’s Day in 2017 still have time to show voters some love. Most national and state elected officials made promises on the campaign trail to make important changes in office to improve tense relationships between the governed and their government.

The road to the doghouse is paved with good intentions. Although 2017 is still young, legislative sessions will soon expire: one in February, eight in March, 11 in April, 11 in May, and nine in June. For 17 states, crossover deadlines land in February and March, heightening the urgency for lawmakers to declare their honorable intentions.

Nothing says “I love you” like giving people health care freedom. Here is a bouquet of state health care reforms lawmakers should offer to the people whose love got them elected:

Repeal certificate-of-need (CON) laws.Lawmakers in 35 states should stop swooning over hospital association political support and dollars and should instead repeal protectionist laws blocking new medical facilities operators from entering the market.  CON laws require new operators to obtain special approval from a state board before opening hospitals or other health care facilities. Unfortunately, entrenched special interests, such as existing hospitals whose leadership fears competition, typically weigh in on CON decisions, arguing new facilities would put existing hospitals out of business and put patients at risk.

Consequently, CON laws restrict one of the free market’s most powerful forces: competition. Hospitals insulated from the possibility that patients will find better value elsewhere have little need to improve their facilities, services, or prices. CON laws also use arcane population-counting criteria to determine whether medical facilities may purchase imaging equipment.

Protect direct primary care (DPC) from insurance regulations, and launch pilot programs treating Medicaid patients with DPC.Only 13 states have passed laws specifying DPC is not a form of insurance and shall not be regulated as insurance. The remaining 37 states fail to ensure their insurance commissioners will not shut down new DPC practices. Consequently, physicians are hesitant to treat patients within DPC’s innovative model, in which physicians give patients a range of preventive care services and tests in exchange for a monthly fee as low as $25 per patient, paid directly to their doctors, bypassing insurance.

Many lawmakers mistake DPC for concierge medicine and therefore fail to recognize DPC as a health care solution for all patients, including low-income patients. Unlike DPC doctors, concierge doctors bill insurance in addition to charging patients $1,500 to $5,000 per year. Supposedly, concierge’s value lies in its 24/7 access, but most DPC providers offer a form of 24/7 access (such as through telemedicine) for pennies on the dollar compared to concierge.

Grant physicians reciprocity for treating patients by telemedicine.  Simple reciprocity would allow physicians licensed in one state to treat by telemedicine patients located in a state with similar medical licensure requirements, without the hassle and expense of applying for licenses issued by other states. This proposal differs sharply from the Interstate Medical Licensure Compact circulating among the states, which merely expedites the application process by which physicians in one state obtain out-of-state licenses.

The Compact also establishes a new layer of bureaucracy between physicians and patients. Although the Compact will, one hopes, expand patient access to health care providers across state lines, reciprocity would be simpler. In health care policy, as in all policy, less is usually more.

License new kinds of providers and allow all providers to treat patients using skills at the top of their licenses.The benefits of allowing patients to obtain health care from practitioners such as physician assistants, nurse practitioners, and pharmacists are well established. A comparable profession within oral health care is the dental therapist.  Dental therapists have practiced in more than 50 countries for 95 years, yet in the United States, they practice only in Alaska, Minnesota, and tribes in Oregon and the state of Washington. Maine and Vermont have recently authorized therapists to practice, but none yet works in those states.

Entrenched special-interest groups such as state dental associations typically oppose legislation allowing therapists to gain licensure, arguing therapists are insufficiently trained. But facts are stubborn things. Therapists emerge from the three-year training program at the University of Minnesota School of Dentistry with more training than dentists to perform the approximately 80 procedures Minnesota law lets therapists perform. Opponents also under-appreciate that dentists would remain free not to hire therapists and would remain responsible for supervising the quality of care their employees provide.

States should also remove barriers preventing pregnant mothers from obtaining care from midwives instead of exclusively from obstetrician-gynecologists. California law, for example, bars certified nurse-midwives from practicing as hospital employees. Alabama law has generated a black market for midwives and patients. Lawmakers should trust pregnant patients’ maternal instincts and let these women choose their own health care providers.

Not all significant others will agree with the adage “better late than never,” but it’s worth a shot with constituents (and spouses). Lawmakers should trust the people who had the good sense to elect them to have the good sense to choose the health care providers offering the best value.